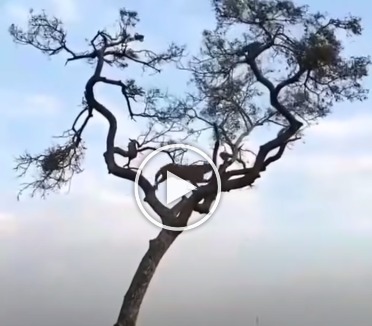 A viral video where a monkey plays with a leopard, who tries to chase a tree

Monkey playing with the leopard

Often on social media, a lot of viral videos of leopard hunting animals are seen, and today another funny leopard video that will make everyone smile. In the video that went viral, one can see that the leopard sees a monkey in a tree and climbs up a tree to hunt it, everyone knows how agile and fast monkeys are. As soon as the leopard starts to approach the monkey, the monkey jumps to the second branch of the tree, and when the leopard goes to the other branch, the monkey jumps to the other side.

Looking at the video of Leopard and Monkey, it looks like they are both playing a game with each other. The monkey as usual stays in a jolly mood whereas the leopard is on a roll to chase the monkey down. This funny video was posted on the YouTube channel “ROAR WILDLY” and so far, this video has received 5.7 million views. Social media users are reacting differently to this video. One person wrote, “Monkey says I can do this all day… I need to save my life,” while another person writes, “Monkey jumps great with minimal support… God-given talent.”