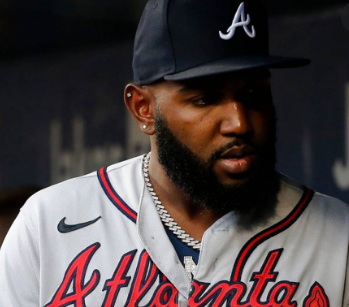 Braves Outfielder Marcell Ozuna was caught by police under the serious charge of driving under influence.

Ozuna talked 18 seconds before the game began, He made a statement but avoided all the questions.

Ozuna is arrested a second time in the last two years, his last arrest was May 29, 2021. A police officer said he attacked his wife and tried to strangulate her. He could have gone to jail but due to completing a pretrial diversion program, he was let go. this time he might have to face jail.

“The Atlanta Braves are aware of Marcell Ozuna’s arrest this morning and are still gathering all the facts pertaining to the incident,” the team said in a statement. “Our organization takes these matters very seriously and are obviously disappointed by the situation. As this is a legal matter, we will have no further comment until the process is complete.”

Norcross Police officer in metro Atlanta caught Ozuna and sent him to the Gwinnett County jail at about 4:30 a.m. Friday.  He was unable to maintain lane due to influence and he was let go on a release bond of $1830.

Ozuna is not been able to perform really well and he is been dropped from a straight fifth game. his performance on and off the field is going to destroy him.

“No, as I said, I think everything’s been said,” Snitker said. “We’re disappointed that it happened, and we’ll just go on.”

Ozuna 31 is in the second year of a $65 million contract and in the last two seasons, he is underperforming.

Ozuna was also accused of beating his wife but he got away last time:

During the 2021 incident of hitting his wife, he was given administrative leave. He was absent during the world series championship run.

“My fans, I’m going to give you the best and I’m going to be a better person, and I’m sorry,” Ozuna said at the start of spring training.

In the last program he was given 3-6 months of supervision, a 24-week family violence intervention program, at least 200 hours of community service, and an anger management course.