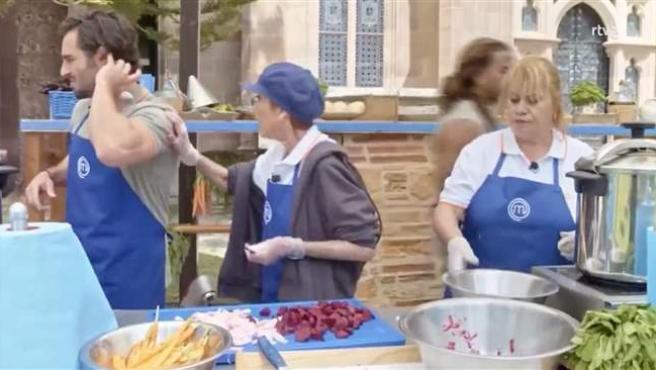 Verónica Forqué went back to messing it up in an outdoor test. If she already did it in the second program of MasterChef Celebrity 6 , where, as captain, she went crazy to put her companions to the limit , in the third the veteran actress did the same. But, this time, the affected person was only one of them: David Bustamante .

The Cantabrian singer, yes, stood up to the interpreter before her continuous comments.

“Do what I tell you. If not, I wouldn’t tell you. And don’t answer me with another question, that’s not teamwork, ” she snapped with authority.

Then, Bustamante, visibly upset, decided not to shut up and put things in their place.

“You say it as if you were commanding, that roll does not go with me. I am in a good mood as long as I am spoken to with respect ,” the Superman singer told him .

However, far from appeasing the spirits, she had the last word. “But what respect? You start doing it, the boss has sent it . ”

What they did not expect is that the captain of the team, Edu Navarrete, would call the attention of the Cantabrian for doing precisely what Forqué sent him. When the singer told him that the actress had ordered it, the designer put Forqué in his place. “Stop commanding people . ”

A very commented scuffle on social networks, where viewers criticize Verónica Forqué’s attitude throughout this edition of the culinary talent .