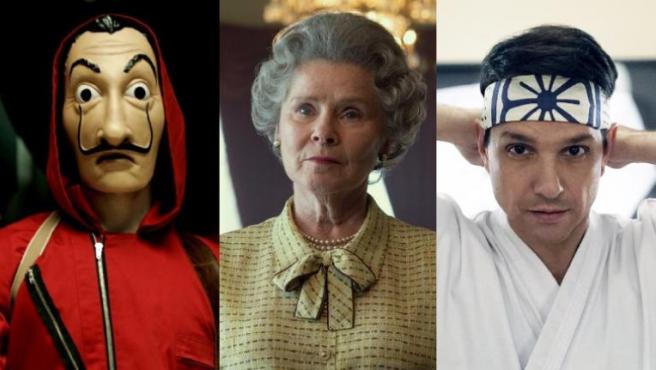 Yesterday TUDUM 2021 was held, Netflix’s online event dedicated to fans from all over the world in which it showed a good part of its news for this year and next, through euphoric announcements, long-awaited trailers and enigmatic teasers . The celebration was extended to three hours in which the most popular series of the streaming service had time to appear in parallel with an original film preview, presented by the stars on the payroll and highlighting in that sense titles such as Army of Thieves, Red Alert , Tyler Rake 2 or, especially, Don’t Look Up , Adam McKay’s new comedy starring Leonardo DiCaprioand Jennifer Lawrence (among many other Hollywood celebrities).

Regarding the series, we have already collected the news corresponding to the fourth season of Stranger Things , the second of The Witcher and the first of Cowboy Bebop and The Sandman , but the gala took care of updating the status of many more titles. Here is a list of the most important ones.

Álvaro Morte , the Professor’s interpreter, took care to present a scene corresponding to Volume 2 of Part 5 of La casa de papel , which will lead to the highly successful series by Álex Pina to its conclusion. to shine) among the surviving members of the band, visibly shocked by the recent death of Tokio ( Úrsula Corberó ). Netflix has confirmed that the last five episodes will arrive on the platform on December 3 , shortly after publishing a special teaser dedicated to the “fallen” who anticipated that the end of La casa de papel it will be as epic as possibly tragic.

One of Netflix’s last big audience hits has been The Bridgertons , the result of a substantial contract by Shonda Rhimes with the platform. This adaptation of Julia Quinn’s novels dazzled the public especially thanks to the character of Regé-Jean Page , who curiously will cease to have a leading role within the second season in favor of Jonathan Bailey. Precisely Bailey is the protagonist of the first clip of these new chapters, where Nicola Coughland, Charithra Chandran and Nicole Ashley (debuting in the series after Sex Education ) will also appear. The second season will adapt the book The Viscount who loved me and will arrive in 2022.

A fictional newscast from the Moordale Institute has been in charge of giving us the good news: Sex Education has been renewed for a fourth season very shortly after Netflix released the third, with the usual applause in this charming teenage fiction. The immediately previous episodes have been marked by the arrival of a new director played by Kemima Kirk and the most difficult image crisis that the institute has faced: a situation in which it will surely investigate the new season. Netflix has not yet given a release date.

The acclaimed continuation of Karate Kid , which began its journey on YouTube before Netfix realized the vein it entailed and took over the production, will return this December 31 with a promising fourth season. In it Daniel LaRusso ( Ralph Macchio ) and Johnny Lawrence ( William Zabka ), bitter enemies, will have to join forces against a common threat within a story that is already renewed for a fifth season, to the relief of the fandom .

Tiger king
The true story of Joe Exotic, the eccentric protagonist of ‘Tiger King’Joe Exotic
A few days ago Netflix published the first images of the second season of Tiger King , just when the fever for this eccentric documentary seemed to be subsiding (the cancellation of a series with Nicolas Cage in the role of Joe Exotic hinted at it). These images have already been enough for Carole Baskin , one of the protagonists, to attack the streaming company ( “they will not play it again,” he says), contributing to a media storm that will only grow when Tiger King 2 is released on December 17 , as confirmed during TUDUM 2021.

Shortly after The Crown was once again sweeping the Emmy Awards, Netflix announced that filming had already started on its most prestigious series. The fifth season of the Peter Morgan drama will address events as controversial as the last days of Lady Diana , flying a recast of its protagonists. Imelda Staunton is the main signing, replacing as Queen Elizabeth II to Olivia Colman and Claire Foy , of those who agreed precisely in a promotional video where it ends dropping the big news: new episodes of The Crown will arrive in November 2022.

The announcement of a spin-off of Vikings came before his final season premiere, illustrating the interest of Netflix and MGM Television seriéfilo continue squeezing this phenomenon. Vikings: Vallhalla , which has presented its first images as part of TUDUM 2021, is set in the 11th century: that is, 100 years after its predecessor. The showrunner is Jeb Stuart while we find Sam Corlett, Frida Gustavsson or Laura Berlin among the cast members. The series will arrive in 2022 and Channing Dungey , an executive of Netflix, has promised her that “It will offer everything fans love about the franchise: unstoppable action with complex characters and a dramatic pulse that puts the focus on family, loyalty and power.”

Oblivious to the various controversies it has produced (as much as some of them completely destroyed the image of the Golden Globes), Emily in Paris is a great asset of the platform, with enough audience for Netflix to have launched a second season. We have been able to see their first images in the online event, in parallel with the streaming service revealing that the new episodes will arrive on December 22 .

After succeeding in 2009 with the launch of the first League of Legends (and consolidating its status as one of the most popular video games on the market in recent years), Riot Games has decided to switch to audiovisual production in the company of Netflix. This is how Arcane has developed , an animated series set in the LoL universe that focuses on the adventures of Jynx and has the original voices of Hailee Steinfeld, Ella Purnell or Katie Leung (Cho Chang in Harry Potter ). Netflix has set its premiere for this November 6 and Domenique Bazay , director of its animated originals, defines it as “a visual whirlwind that will leave viewers breathless.”

Netflix’s initial plan was to make a remake of the Argentine telenovela Rebelde Way , but finally it was decided to do the same with the Mexican version that premiered in 2004. Both indiscriminately unleashed a whole fan phenomenon, which now promises to be revived with the new one. project that aspires to take the leadership of the adolescent series from Elite . During TUDUM 2021 we have been able to see a teaser where you can already appreciate the musical benefits of the new members, in parallel with the publication of an image with the entire uniformed cast. Rebel will arrive sometime in 2022.