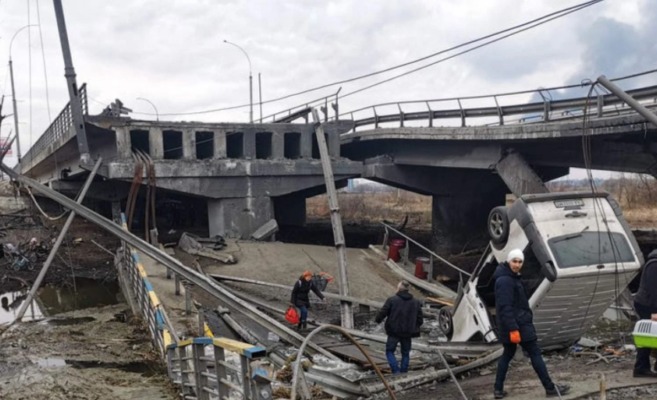 The Russian-Ukraine crisis takes a turn for the worse amid tension arising on both sides of the conflict. Recently a video went viral that showcased the horrors of war the likes of which Ukraine is going through at this time. In a horrifying clip from Ukraine’s warzone of the city of Irpin, locals are seen taking cover as violent bombardment blows down trees and puts sand whirling through the sky.

Images and videos of mutilated corpses resting on the streets of the city, wrapped in blankets, were circulated by the press. It was unknown if they were the only ones among all those injured.

The video showcased eight individuals who were allegedly slain by Russian bombardment in Irpin, Ukraine, as they attempted to flee the city, which is located northwest of Kyiv. Oleksandr Markushyn, the mayor of Irpin, said that two of the victims were teenager siblings and that eight people had been murdered in all.

According to sources, the people were murdered on March 6 in the morning when Russian cannon shells struck an already wrecked bridge as civilians attempted to cross it.

Russian troops and government deny striking people on purpose. The assault is described as a “special military operation” aimed at disarming Ukrainians and removing authorities it considers to be radical fascists. Ukraine and its Allied nations see this as a blatant excuse for an attack to capture the 44 million-strong country. Hundreds of Irpin locals fled and raced across a road littered with rubble and filled with destroyed vehicles and apartments, demonstrating the fury of the shelling on Sunday.

Many citizens were able to run away from Irpin before facing the attack, according to local officials. According to them, Russian soldiers occupied around 30% of the city, while everything else was within Ukrainian command.