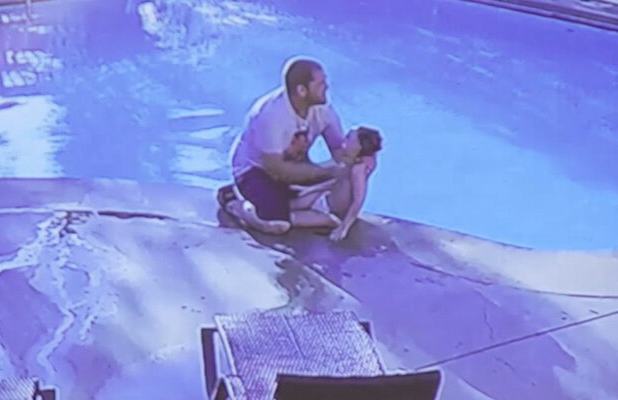 Breathtaking act of a Kansas man and his son.

A hero Kansas man jumped into the pool to rescue a differently-abled child. luckily the entire incident was caught on camera for us to look at and be inspired with.

Xavier Rigney 4-year-old autistic nonlingustic child found himself in the deep end of the swimming pool after he somehow escaped from his apartment.

Her mother has Lawrence’s apartment and Xavier after leaving the apartment found an entrance to the secured pool. This incident happened on May 18.

a young child was wrapped in a diaper and once he found himself in a deeper end he was completely helpless. His entire body was under the water after trying for a little while and unable to find anything to latch onto he almost collapsed.

This entire incident was seen by his neighbor and his father. Son Maddox Westinghouse who is a 12-year-old teen informed his father about the accident and his father Tom wasted no time in jumping the fence and getting into a swimming pool.

Tom took the boy out within seconds as seen in the video.

His lifeguard experience came in handy as he knew how to give CPR. Tom performed CPR on the boy for 3 minutes. By the time Lawrence-Douglas County Fire Medical battalion chief Rob Fleeup arrived at the scene, he found the boy breathing and smiling.