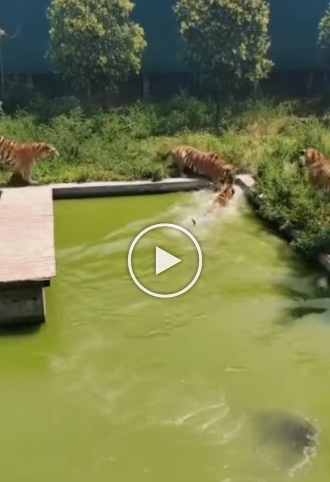 About the video of the Duck and Tigers:

On social media, we see a lot of viral clips of animals and birds, and today we have a video of a duck’s intelligence for you to watch over and over. When a duck is in the water, a tiger gets down into the water with the motive to hunt it down and tries to catch the duck so it can become its meal, as seen in this video uploaded on Instagram. The duck tries to escape and come out of the water to save its life, but three tigers emerge from the water and attempt to catch it.

As soon as all of the tigers try to catch and hunt the duck, it dives into the water and vanishes someplace beneath the surface. And in the video later it is seen that the Tigers stand there watching surprisingly and trying to locate the duck, but they are unsuccessful.

Details about the video:

This video, which has gone popular on social media, was published on Instagram by an account called Tiger Iking, and has so far been viewed by over 2K people. After watching this video, social media users are admiring Duck’s wit.