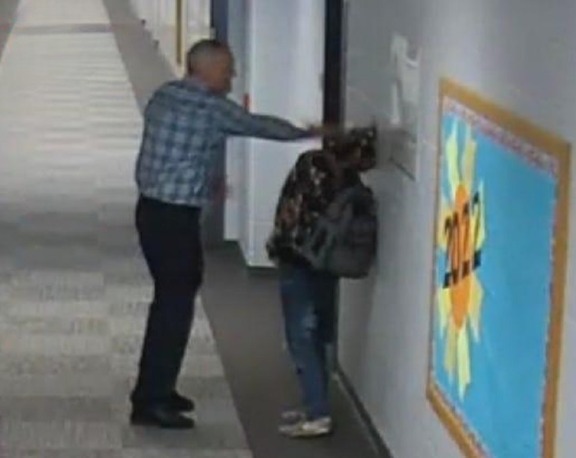 The footage showed the teacher, Mike Hosinski striking a student in the head before the morning classes on Monday.

In a shocking video that was released to the public recently, a teacher from Jimtown Highschool named Mike Hosinski was seen beating a student before the morning class in the school’s corridor. The disturbing footage has made people angry and parents have taken the complaints of their child’s very much visible injuries to the school board.

The schoolteacher is seen taking the child’s bag and forcing them against the wall, according to a CCTV video supplied by the district. The teacher then takes a step back and leans over the pupil, shaking his fist at them before hitting them. As the instructor tries to lead the kid along the corridor, the child collapses to the floor. According to the district, the slap forced the student’s forehead to hit the wall, resulting in obvious injuries.

The school administration overwhelmingly decided Monday evening to give Jimtown High School former teacher Mike Hosinski an early retirement after he was seen on film punching a pupil in the face the other week. Hundreds of Jimtown students organized a protest on Monday morning to express their support for Hosinski, the schoolteacher who another attendee described as “calm and collected.”

Hosinski had served at Jimtown for over four decades and was selected Teacher of the Year in 2020. To express solidarity for Hosinski, a Fb page was launched. It drew a total of 575 participants. The webpage appears to have been taken down at this time. “It took place. “We’re not proud of it, but Mike Hosinski has my support,” a parent stated.

“For just one occurrence to ruin his reputation…he feels extremely horrible after the time…what that’s I’m sad about.” Terry Hilyard, a friend, and former coworker described the former teacher as “a wonderful guy.”

Read Also:-  John Demsey is out of The Estée Lauder Companies after sharing a racist meme on Instagram