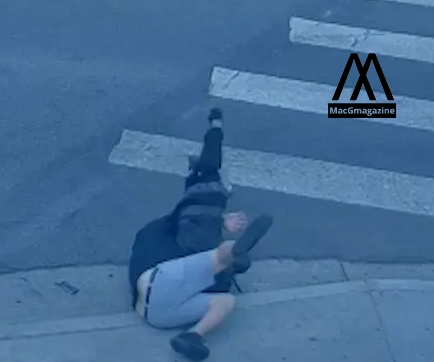 A great human being Tim Ratcliff fought an alleged robber. Tim Ratcliff runs a restaurant in Hollywood and he did what most men should do.

“Surveillance video shows a person sucker-punch an elderly man, then get tackled by a business owner,”

“I took him down and just waited there until the police arrived,” Tim Ratcliff said.

Tim Ratcliff saw that a robber punched an old man :

The Robber was a pathetic man who did not hesitate to punch an older man. any person who attacks old people cannot be termed good. the police should file a strong case against him and the court should give him an exemplary punishment.

The thief was interested in looting the victim’s cellphone and wallet.

Tim Ratcliff beat and tackled the suspected criminal at the midsection of La Brea and Hollywood.

Ratcliff’s girlfriend also understood that this was a serious situation and she helped her boyfriend to keep the Robber under control. Another civilian was kind enough to land a hand. the entire situation went on for 9 minutes. Police arrived 9 minutes later.

“I was not gonna lie, the adrenaline was a lot at that point, and afterward it was exhausting, it felt like I had worked out the next day for quite a bit.”

LAPD has come up with the idea of additional 200 police officers to combat crime:

“Even one of the officers and I talked about it … they’re tired of it … a lot of people like myself are tired of this type of thing happening … we’re seeing more and more people just not putting up with it and taking it into their own hands … which I’m glad for … and I’d happily do it again,” Ratcliff said.