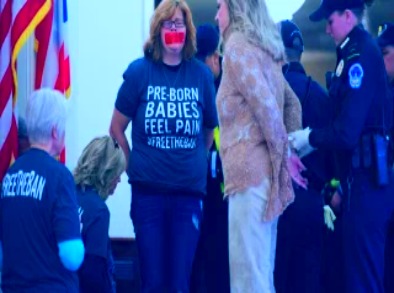 On Wednesday, five fetuses were discovered by DC Police at the home of an anti-abortion activist in Capitol Hill, it was confirmed to WUSA9 by the department.

Who was Lauren Handy?

From a tip about potential bio-hazard material in a residence, the officers started investigating shortly in the mid-day time to a home on the 400 block of 6th Street SE. Inside the house, the officers located the fetuses. The D.C. Office of the Chief Medical Examiner collected the remains.

The house was occupied by an anti-abortion activist, Lauren Handy who was accused of the crime along with nine others on Wednesday by a federal grand jury. Against the rights for a blockade inside a D.C. abortion clinic in October 2020, Lauren Handy is accused of felony conspiracy.

The evidence was taken out in red biohazard bags and coolers from the rowhouse’s basement by the DC Police homicide and forensic services detectives which were captured by WUSA9’s camera.

On Wednesday Handy declined to speak on camera, meanwhile telling WUSA9 that she was expecting the raid to happen very soon or maybe later. Also, she did not say anything about what was in the coolers, commented only that “people would freak out when they heard.”

On Thursday, Ashan M. Benedict, DC Police Executive Assist. Chief of Police said to the reports that there doesn’t seem to be anything criminal about it, except for how the fetuses got into the house.

He further said that the investigation which was led by officers to Handy’s home was different from the federal investigation. Benedict did not comment on whether the department was working with agencies in different states, said that it was only the first day of the case.

Where did Handy work?

Handy served as director of activism in Progressive Anti-Abortion Uprising, they did not immediately respond to a request for comment. Later, tweeted on Thursday that the organization is planning to “address the claims surrounding the 5 deceased children found at Lauren Handy’s apartment at a press conference in DC.” Further stated that it would take place on Tuesday at 11:30 a.m.

How was bio-hazard material found?

The prosecutors claimed that Lauren Handy called the clinic and pretended to be a woman named “Hazel Jenkins” who needed an abortion. Further, she booked an appointment for the morning of Oct. 22, 2020. That morning, she allegedly moved to a clinic employee and told that she was Hazel Jenkins there for her appointment. As the employee opened the door, the indictment says, Handy and the other co-defendants forced their way into the clinic. In the process, the clinic employee was knocked over, causing an ankle injury.