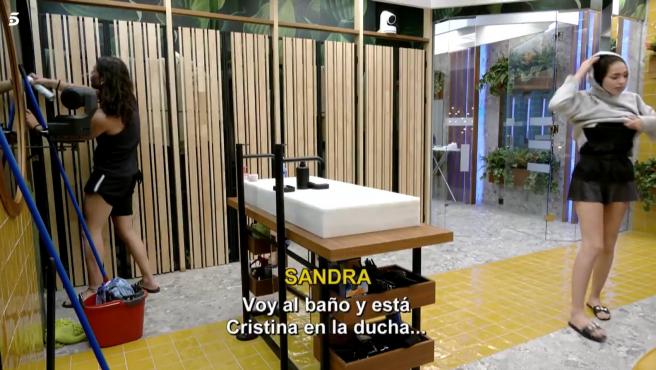 The contestant of Secret Story ( Telecinco ) Sandra Pica has related an anecdote that happened within the reality show when she has gone to the common bathroom and has found a curious scene.

“I go to the bathroom and Cristina is in the shower and Luca is opening the shower door for her and she was completely naked, ” Sandra Pica told several of her colleagues.

What Sandra Pica omitted, perhaps because she did not notice , perhaps maliciously, is that Luca Onestini , brother of the well-known reality TV contestant Gianmarco, was passing what appears to be a bottle of foam for her hair to the journalist Cristina Porta.

The gossip, however, is of relative interest because the Italian has a certain affinity with the Spanish journalist, while another of the contestants, the German Emmy Russo, also wants him.

“I don’t know how I do it, but I always get up at the best time,” says Sandra Pica to her classmates, about the opportunity to enter the bathroom to witness a scene.

In it, at the end of the video, Cristina Porta can be heard asking, with a certain anger, Luca: ” Leave the door open for me, let me dry off! “.

“It’s only been three weeks, it’s very early, I don’t see any kind of ‘maracana’ “, declared Gianmarco when seeing the images, being ‘maracana’ a euphemism used by the Italian to refer to sex.