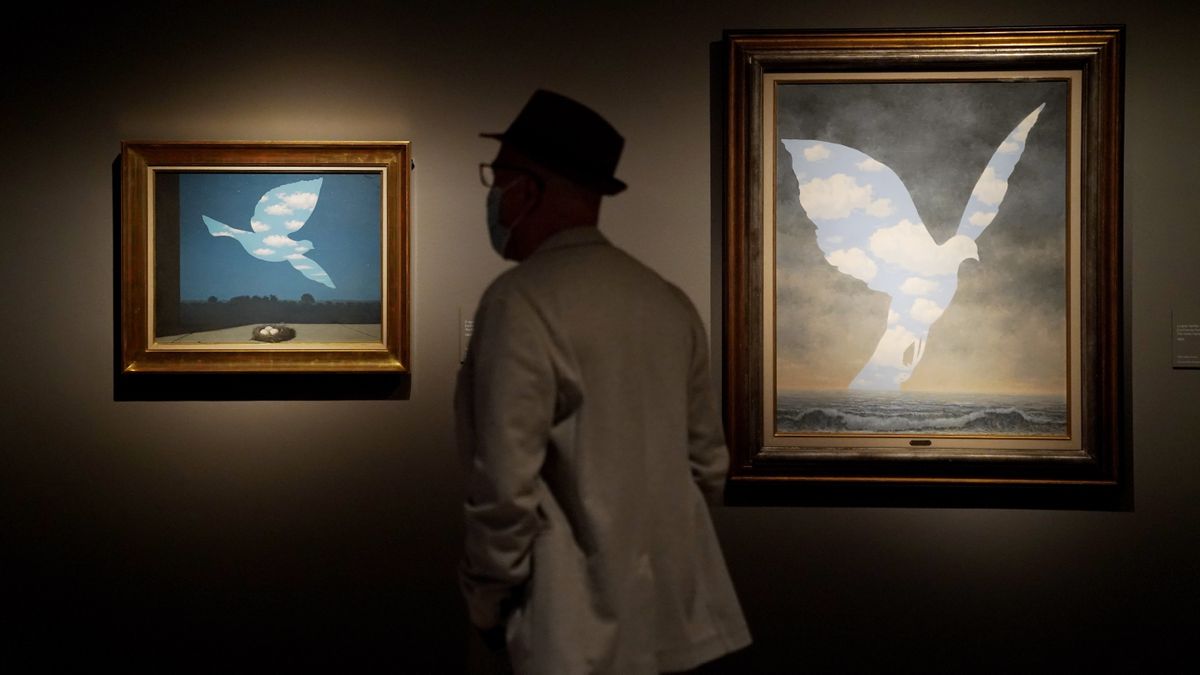 The season of major exhibitions opens with one of the most anticipated exhibitions: René Magritte’s at the Thyssen in which we can immerse ourselves in the artist’s imagination through 95 works in which the limits of reality are overturned.

René Magritte (1898-1967) continues to be one of the most indecipherable and fascinating painters in the history of contemporary art. His universe is full of paradoxes, distorted volumes, symbolisms, images that take us to imaginary universes as ethereal as they are tangible , almost as if we were entering a science fiction film in which reality is upset to offer a distorted interpretation. , but plausible, of the world we live in.

Magritte was a kind of wizard who seemed to know secrets elusive to other mortals. And all that knowledge as surreal as conceptual, he captured it in iconic images that are part of the collective imagination in which, above all, mystery and sublimated strangeness beats.

Now, the Thyssen Museum brings us closer to the work of the Belgian artist through the exhibition ‘The Magritte Machine’ , which can be seen in Madrid from September 14 to January 30 and then will travel to the CaixaForum in Barcelona, ​​from September 24 February to June 5, 2022 . In it, 95 paintings are exhibited (also an installation with photographs and home movies), among which are works as representative of his style as ‘The betrayal of images’, ‘The principle of pleasure’ or ‘Personal values’ .

In all of them, his reflection on the limits of perception and reality is revealed through deception. Among the most notorious absences, that of ‘The lovers’, owned by MoMA, ‘Golconda’ or ‘The son of man’ (which inspired The Beatles to create their record label). The Reina Sofía has contributed with the two pieces that it has in its collection, ‘The secret of the courtship’ and ‘Pink bells, skies in shreds’ and the Telefónica Foundation, with ‘The beautiful society’.

Postponed by the pandemic
Guillermo Solana, artistic director of the museum and curator of the exhibition, has acknowledged that he thought that it would never see the light of day, since it had to be postponed last fall due to the pandemic. He has titled it ‘The Magritte Machine’ to underline the repetitive and combinatorial component of those obsessive themes that come back again and again with innumerable variations , as evidenced by the 17 versions he came to make of ‘The Empire of Lights’.

“The easiest thing would be to define him as an artist given over to delirium and absurdity, but his nature was extremely rigorous and methodical. He returns to certain reasons to seek permutations by making his ideas evolve ”, Solanas declared at the press conference to present an exhibition that is divided into seven sections: The powers of the magician, Image and word, Figure and background, Picture and window, Face and mask, Mimicry and Megalomania.

The thematic route is, at the same time, also chronological, with the first room corresponding to its beginnings, so that we can follow its creative evolution until it ends in more figurative territories. Although the interesting thing is to be able to verify in each of the sections, how the concepts that began in the 1930s and were mutated until the 1960s are put into dialogue , as occurs in ‘The summer steps’ and ‘Delusions of grandeur’.

Magritte has been a strong influence within popular culture and we find direct references in films such as ‘My girlfriend is a zombie’ (which reproduces the painting of ‘The Lovers’), ‘The Exorcist’, with the mythical arrival of Father Merrin to the house illuminated by a lamppost, which refers to the series ‘The Empire of Lights’ or the staircase that Jim Carrey climbs in ‘The Truman Show’, which refers to ‘Moonlight Architecture’.