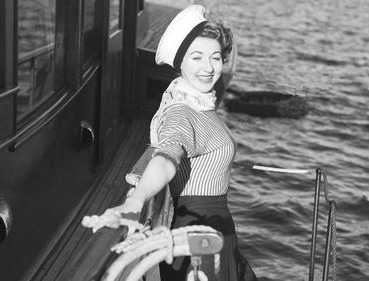 When a well-known Sydney actress was snatched and attacked by what newspapers described as a “giant” shark, she was standing in water no deeper than 75cm. Marcia Hathaway’s young, bright life was stolen away by a bull shark on January 28, 1963, in an attack that stunned Sydney. Her fiance rescued her from the sea at Sugarloaf Bay in Middle Harbour, but she died while waiting for an ambulance that broke down on the way there. “Don’t worry about me, sweetheart,” she said in her final words, which were reported in The Courier-Mail on January 29 under the headline Actress Dies: Fiance Fights with a Shark. “God will take care of me.”

Despite missing a major portion of her right leg, the 32-year-old from Milson’s Point informed him she was “not in agony.” The following day, the Sydney Morning Herald revealed details of her fiance, Frederick Knight’s valiant attempt to save her. “When the shark struck, her fiance, who was nearby, fought the shark with his hands and kicked it as it twisted in the blood-stained water, attempting to drag its victim into deep water,” according to the newspaper. “Miss Hathaway succumbed to her horrific injuries and shock 20 minutes later. Her right leg was nearly severed by the shark.”

A sizable crowd could be seen gathered around a vehicle with a bull shark on its roof racks in black and white images taken in the days that followed. The alleged killer shark was on display for everyone to see.

Marcia was the first person to die in a shark attack in Sydney:

The happy pair had recently become engaged and had selected Middle Harbour for a picnic over the Australia Day long weekend, according to archival stories from the 1960s. Marcia, a stage and screen actress, would be the first to die in a shark attack in Sydney waters in 59 years. That changed on Wednesday when a swimmer was fatally bitten by a 4.5m great white shark off the coast of Little Bay, not far from rock fishers. At around 4.30 pm on Wednesday, emergency services were dispatched to Buchan Point in Sydney’s east after reports of a shark attack in the ocean. Rescuers around 6 pm discovered human remains after the person died from “catastrophic injuries.”

Duty to Save Lives in the Water Two Surf Life Saving Sydney jetskis will be on the water, and two drones will be in the air to help police this morning. “This is a tragic tragedy, Sydney’s first fatal shark attack in decades.” SLSNSW President George Shales expressed his condolences to his family and friends. The Department of Primary Industry will work with police to investigate the swimmer’s death circumstances. For the Coroner, a report will be written.

Read Also – Simon Nellist, a diving instructor, died after being attacked by a shark