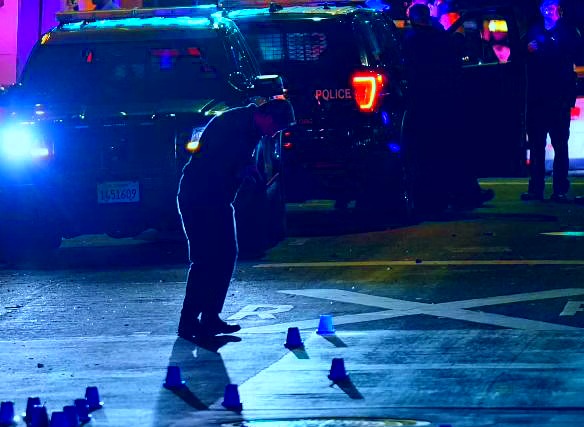 Melinda Davis is one of six victims.

A homeless lady who had lived on and off along 10th Street for more than a decade was among those slain in Sunday’s mass shooting in downtown Sacramento. Shawn Peter, a Downtown Sacramento Partnership guide known Davis for 15 years, said Melinda Davis, 57, was one of six persons killed when shooters opened fire along 10th Street as adjacent restaurants and nightclubs were closing. Davis would frequently sleep in the entrances of nearby establishments, including the London nightclub and Bloem Decor Florist.

In addition, she sought shelter in a restaurant alcove on K Street when it rained. On Monday morning, a little arrangement of purple roses was placed on the pavement in front of London, along with a message said, “Melinda Rest In Peace.” “This was her favourite area,” Peter explained. “This was her universe, 24 hours a day, seven days a week.” Tangela Hicks, Davis’ acquaintance, described her as a kind woman who disliked being around many other people. It was unknown Monday afternoon, which was responsible for the gunshot, which occurred outside nightclubs in the early hours of Sunday. Katherine Lester, the chief of police, stated that numerous gunmen were engaged.

On Monday, police announced the arrest of Dandrae Martin, whom they characterised as a “related suspect” in the shooting. Mr Martin was detained on assault and illegal weapons possession charges, according to police, who added that authorities searched three homes in the Sacramento region in connection with the investigation. In a statement issued Monday, Sacramento County District Attorney Anne Marie Schubert stated that Mr Martin has “not been arrested for any homicide related to this incident.” “Right away, people wanted to come up and talk,” Angela Hassell, executive director of Loaves and Fishes, said.

“Even if they didn’t witness (the shooting), it’s still a major trauma when something like this occurs.” It sends shockwaves across the neighbourhood. People who are homeless are vulnerable on the streets. They tend to feel more exposed when situations like these happen.” Six homeless people were killed in Sacramento last year. This one hit especially hard because of its location — in the middle of downtown, where hundreds of unhoused people dwell, according to Vince Gallo, programme manager of Loaves and Fishes’ Genesis mental health programme.

The homeless are victimised:

“Everyone wants to discuss it,” Gallo added. “It’s not only about what happened; it’s also about where it happened.” Davis’ death, according to Mayor Darrell Steinberg, provides “another opportunity for thought and action.” “The homeless are victimised in more ways than those of us who are concerned about or worry about the greater social condition,” Steinberg remarked. “Here is an innocent person who was homeless or unsheltered and lost her life.” If this tragedy motivates us to try even more to bring more people indoors, her memory will be a blessing.”