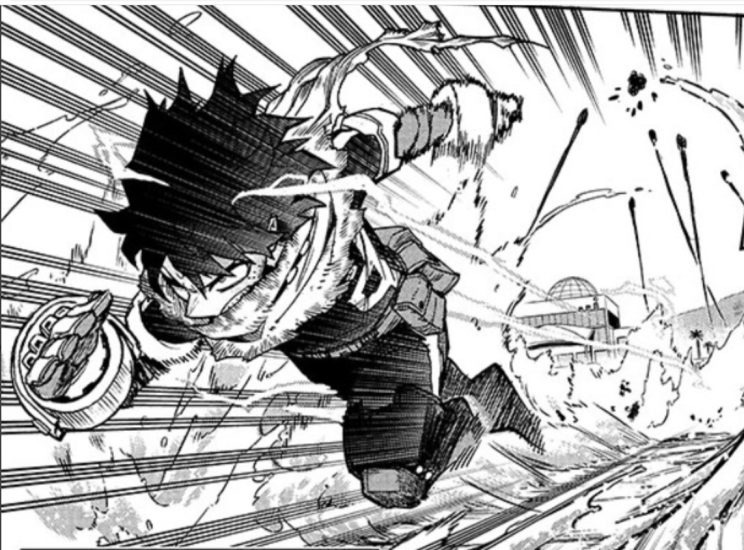 Know about the chapter open with-

As the chapter opens with Deku flying over the ocean using a combo of Fa Jin and Float. He uses Air Force to flick the air and propel himself. Although, his speed remains underwhelming. For some reason, Deku is unable to use his Black Whip. At this point, the ghost of the second user appears before him and tells him to get a grip on the situation.

Deku realizes in “My Hero Academia” Chapter 349 that he cannot utilize 100% power of One For All as it would destroy his suit. Then the o server asks him if he wants to use his Quirk. Deku wants the Quirk, but the other user recalls that he already had asked him to use it as the last option. The other user feels Deku won’t be able to utilize it, and the Quirk will only become an obstacle. The other user told Deku to trust his friends and take the safest route possible.

In the scene “My Hero Academia” Chapter 349 cuts to the aquarium where Tsuyu and Ochako talk about Deku’s exit, and in between, Toga is tired of the three students from U.A. and decides to do what she thinks is the right thing to do. Soon, she reaches out for her blood compartment and announces that she doesn’t need any heroes.

Uravity is ready to fight as she enters her attack mode and states she, what they feel right Uraraka, and Ochako also will do. Dabi is shown as hanging from All Might’s statue as he remembers the chaos that ensued in Hosu. A battle between Dabi and the heroes will begin Soon. At the end of the chapter, Touya states that the ongoing war results from conflicting ideologies and personal issues. It is time for the world, Touya says that to know the real story of Dabi.

On Sunday, “My Hero Academia” Chapter 349 will be released. This chapter fans can read online on Manga Plus and Viz.