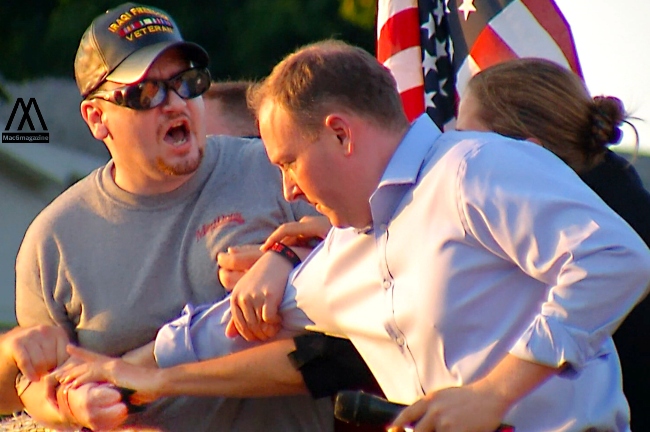 The republican candidate wishes to be the New York governor and he attended the New York GOP convention in march. He was attacked by a man with a weapon on Thursday. He was safe when he escaped.

“I’m OK,” Zeldin said in a statement. “Fortunately, I was able to grab his wrist and stop him for a few moments until others tackled him.”

Zeldin is competing against Democratic Gov. Kathy Hochul this November. The campaign manager said the attacker is arrested and his motivations are questioned.

The attacker reached Lee at a lower stage where he was making a speech. He was in Rochester speaking to his supporters when the attack took place. a video on social media network twitter shows two men falling down from a stage possibly the attacker and Lee.

many people tried to save Lee Zeldin but his running mate Alison Esposito who has served in the police was the first to come in between.

Nick said he is unaware of the weapon type but he talked to Lee after some time and Lee sent him the following message.

“He is fine. He’s not seriously injured. It’s just a chaotic scene there,” Langworthy said. He said Zeldin had “just a little scrape” but it wasn’t what anyone would consider an injury.

His opponent Hochul has condemned the attack.

she was “relieved to hear that Congressman Zeldin was not injured and that the suspect is in custody.”

Nick called on Hochul to provide proper security to Lee while he is campaigning.

Lee’s main election agenda is to fight against crime. He needs to reach to independent voters which are a bigger chunk than Republican voters.