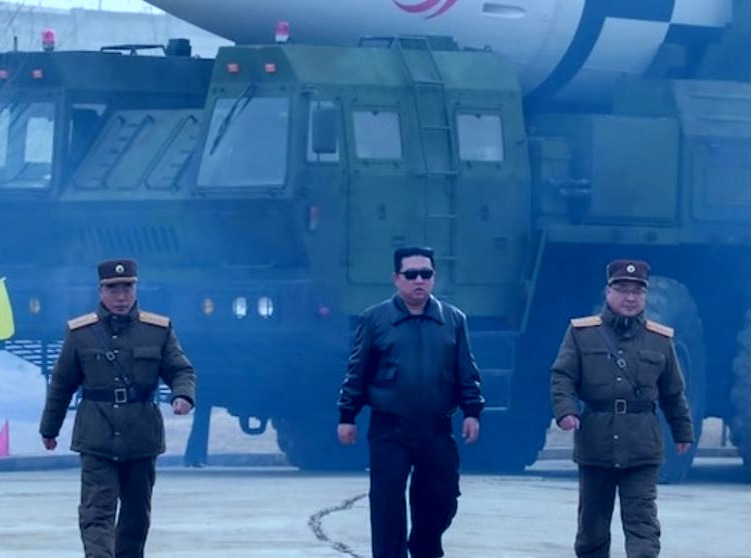 In a recent video, the supreme leader Kim Jong Un in seen walking towards the camera, backed by the army generals of North Korea get ready to fire the massive Hwasong-17 missile, Pyongyang’s first ICBM test since 2017. The leader is wearing sunglasses and a leather jacket as seen in the video which was filmed in a complete old Hollywood style. North Korean official media hailed the launch of the largest-ever missile on Friday. The video is getting viral over the internet due to its nature of filming. It is 12 minutes long video where the whole process is shot starting from the entry of the leader to the successful launch of the giant missile. The video moves between two generals and Kim checking their watches over dramatic music, then Kim pulls off his sunglasses and gives a nod, sending men to bring the massive missile into place.

The video’s approach, according to Cheong Seong-Chang of the Sejong Institute’s Center for North Korean Studies, demonstrates Pyongyang’s growing confidence in its military capabilities. He even commented, “They’ve grown enough confidence in their military that they’re willing to turn it into a film and enjoy it.”

The video was also compared to the movie “Top Gun” and the South Korean K-pop smash “Gangnam Style” by the netizens worldwide.

The huge ICBM, known as the Hwasong-17, was initially displayed in October 2020 and has been termed a “monster missile” by observers. It had never been successfully test-fired before, and Pyongyang’s neighbors and the United States were outraged by the launch.

Although the missile launch was a successful event for the North Koreans it is not to be forgotten that North Korea is already subject to harsh international sanctions for its nuclear and missile programmes, and the UN Security Council will convene an emergency meeting on Friday to discuss the launch.

Read Also – Wayne Mackey dies at an age of 62, Obituary, Cause of Death