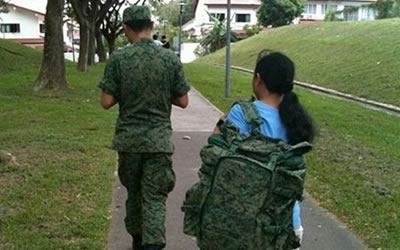 On March 2, Wednesday evening, a 25-year-old militarily prepared national serviceman (NSman) collapsed and passed away while engaging in a Health Promotion Board (HPB) Quick HIIT session. The man was taking part in a Quick HIIT exercise session as part of the NS FIT plan.

Since investigations are continuing and protective measures are now being evaluated, all HPB Quick HIIT sessions will be postponed till Sunday, according to a press statement by HPB and the Defense Ministry on Thursday morning.

The NSman officer fell just at beginning of the primary exercise after finishing the light workout sessions, as per a joint report from the Defence Ministry and the HPB. Although he was instantly treated and attended on-site by HPB’s outsourced vendor’s instructors, he could not be saved in time despite their valiant efforts.

At sharp 7:41 p.m., the Singaporean Civil Defence Force (SCDF) was informed of the situation. Around 7:55 P.M., the victim was rushed via an ambulance to National University Hospital. As per the statement released by HPB and MINDEF, “The SCDF continued resuscitative efforts on-site as well as en route to the hospital. The ambulance arrived at NUH at 8:23 P.M. and he was pronounced dead at 9:21 P.M.”

Ahead of the start of each practice, on-site health instructions and well-being inspections are done throughout all HPB bodily exercise programs. The NS FIT program, which began in 2021, is an exercise program aimed at encouraging NSmen to live active and healthy lifestyles by bringing NS fitness activities closer to the community.

“The HPB, the Ministry of Defence, and the SAF express their heartfelt sympathies to the family and are assisting them in their time of mourning,” HPB and MINDEF issued in their statement.