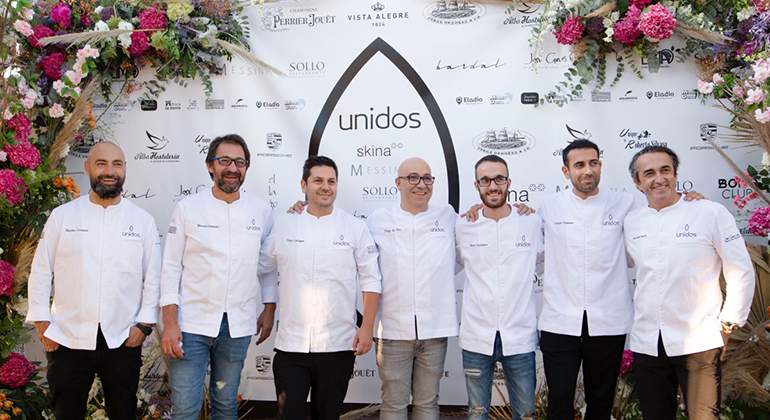 Malaga haute cuisine is celebrating. The province’s Michelin-starred chefs have come together for the second edition of the ‘Unidos’ event, to highlight the sector and the unity that reigns in the guild.

The ‘Unidos’ event has celebrated its second edition in style. The chefs Benito Gómez , from Bardal (two Michelin stars); Mario Cachinero , from Skina (two stars); José Carlos García , from José Carlos García Restaurant (one star); Mauricio Giovanini , from Messina (one star); Diego Gallegos , from Sollo (one star); Fernando Villasclaras , from El Lago (one star) and Diego del Río , from Boho Club, met the night of September 26 at the Boho Club, in Marbella, to highlight their profession and share a memorable experience with more than one hundreds of clients and friends.

The experience included a dinner with a tasting menu consisting of fourteen courses, seven appetizers and seven main dishes, with two proposals from each participating chef. To open the mouth, Morsollo and almond macaroon, Parfait label rouge and silver, Cucumber meringue and creamy cuttlefish, Smoked eel bun, Lobster and payoyo tart, Panipuri octopus with coriander baton and pumpkin seeds and enlisted tart with mango and jalapeños.

Diego del Río has been the host chef of this edition, for whom this opportunity has been “an enormous illusion”, since since the opening of the Boho Club, and with everything that happened with the pandemic, “it is the first time that I have reunited with my colleagues, who are also friends, to live together an unforgettable experience “.

The special selection of wines that made up the pairing was commissioned by Richard Mena , sommelier at the Boho Club, who has included abundant national references to accompany the dishes.

The event, which also pays tribute to local produce and the best Malaga raw material. And as important as the kitchen is the room service, made up of the teams from the seven restaurants, led by Miguel Escribano, head of the Boho Club Room.