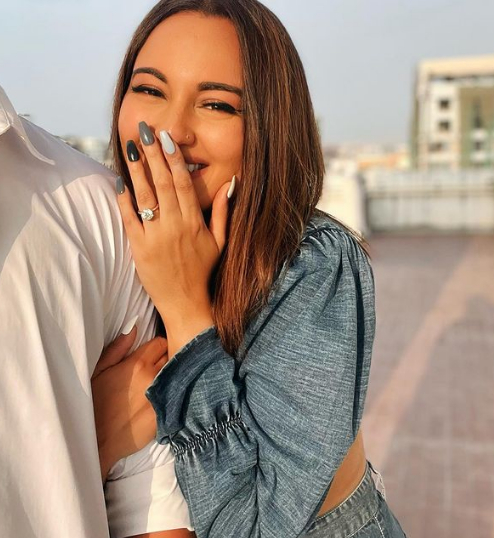 Sonakshi Sinha’s latest Instagram posts have piqued our interest. On Monday morning, the actress tweeted a couple of photos of herself, one of which shows her wearing a diamond ring on her ring finger and smiling heartily. In her comment, the actress teased her fans, saying she can’t wait to share some “important news” with them. We can’t be sure if that’s an engagement ring, but the photos she uploaded on Instagram show Sonakshi smiling with a man who has been cut out of the frame – just enough to tempt fans. She wrote in the caption: “It’s a big day for me!!! One of my fondest wishes is coming true. Can’t believe it was so EZI,” she said in her message.

Last week, Sonakshi Sinha became a major sensation after Notebook star Zaheer Iqbal addressed romance rumours with the actress and told India Today: “I don’t care anymore because it’s been so long. Okay, if you think, then think, I say. Continue to think. It’s beneficial to your health. It’s good for you if I’m with her because it makes you happy. Then please accept my apologies. Stop worrying about it.”

Sonakshi Sinha had her big Bollywood breakthrough in 2010 with the film Dabangg, in which she starred alongside Salman Khan. She also appeared alongside Salman Khan in the remaining two instalments of the Dabangg series. Sonakshi Sinha has appeared in a number of films, including Rowdy Rathore, Son Of Sardaar, Dabangg 2, Holiday: A Soldier Is Never Off Duty, Lootera, Once Upon A Time In Mumbai Dobaara, R… Rajkumar, Action Jackson, Kalank, and Mission Mangal. She was most recently seen in Bhuj: The Pride Of India, alongside Ajay Devgn, Sanjay Dutt, and Nora Fatehi. Her next appearance will be in the film Kakuda. She will also appear in the film Double XL alongside Zaheer Iqbal and Huma Qureshi.