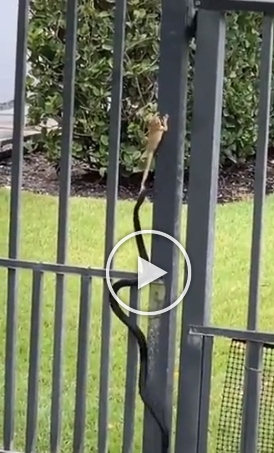 Snake tries to catch a frog but fails, seen in a viral video

It is said that one must keep working hard and never give up and the video that is seen today is the best example of that. A video is circulating on social media of a snake attacking a frog to hunt, and then what happens would surprise everyone. The video was shared by officer Susanta Nanda of the Indian Forest Service on her Twitter account, with the video’s caption reading “Never give up.”

How did the frog save its life from the snake?

In the shared video, a black snake at the gate of a house is seen attacking a frog to make it its prey. Once the snake catches the frog, the frog sticks to the gate to save its life, and even after repeated attempts by the snake, it is unable to drag the frog down, and after trying, the frog manages to get rid of the snake. As soon as the frog escapes from the clutches of the snake, it quickly escapes from the top of the gate and climbs the tree. After watching this video, netizens react differently.

Read Also –  In a viral video, the life of wild beast gets saved from a herd of lionesses