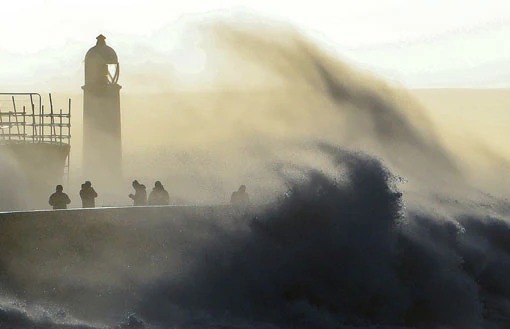 Storm Eunice rages as people take shelter inside their home

Strom Eunice blasted through northern Europe on Friday killing 9 citizens and injuring many more. Nature’s deadly persona is wreaking havoc on the citizens of the United Kingdom as of now. Storm “Eunice” has been declared as a wind-only red weather warning by the UK Meteorological office. A red warning regarding the weather means that there is a “danger to life”. This warning has not been issued since 2016’s Storm “Gertrude.”

According to the UK meteorological department, a gust of 122 mph (196 kph) was recorded, which is claimed to be the biggest ever recorded in England. At least three individuals died in the United Kingdom, including a man who died in southern England when his vehicle struck against a tree, another guy killed in northwest England when his windscreen was smashed by wreckage, and a lady in her 30s killed in London when a tree fell on her car, according to police. Three people died in the Netherlands from falling trees in and around Amsterdam, while a fourth died after crashing his vehicle into a fallen tree trunk in the northern province of Groningen.

In The Hague, several residences were abandoned due to worries that a chapel structure may fall. The structure was seen swaying and a massive chunk of debris crashing on an automobile in the clip. Similarly, electricity companies reported that Eunice’s gusts cut off electricity to more than 140,000 houses in England, largely in the southwest, and 80,000 residences in Ireland. As many people took official guidance to remain at home, London’s rush-hour streets, which have been slowly recovering to pre-pandemic levels, were nearly deserted. At London’s airports, as well as Amsterdam’s terminals, a number of flights were suspended or postponed. Before being forced back to Bordeaux, one easyJet aircraft experienced two failed landings at Gatwick, with gusty winds reaching 78 miles per hour.