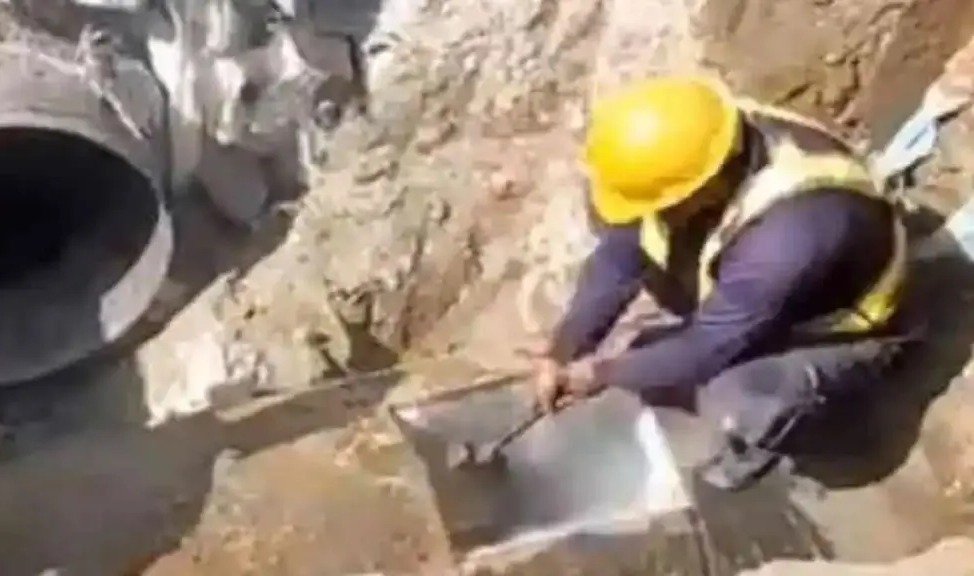 Recently, a horrific video of a construction worker being sucked into a water pipe while filming the construction of the Taiwan Water Corporation pipeline replacement project in Tanzi district (Taichung city) has surfaced on reddit. The footage of the event was released in early December.

The worker was seen sitting on top of the steel pipe and demolishing a 60*40-centimeter square piece using a lump hammer.

When the steel plate finally smashed off, the worker lost all his control and fell down.

He tried to save himself for a short period of time by hanging but the suction force which was caused by the pipes vacuum forced him into it and he was sucked in there.

His coworkers somehow with efforts managed to bring him out but till then he had lost his breath already.

But when the medical team came to rescue him, he was dead already. Though this incident occurred in December but still the investigation is going on and people are searching for more information because of another death of a construction worker. On Wednesday a worker was killed on the future site of METRO PURPLE LINE EXTENTION PROJECT WILSHIRE by a construction train which struck him.

Such nature of work leads to the death of many construction workers while on site. It is so disheartening that people die a terrible death where nobody can help them survive. As per the recent information the worker who lost his life by being sucked in the pipe has been identified as a 50-year-old Zeng which on the other hand is a very saddening news for everyone. However, no other personal information about the man is revealed as of now.

The labor department should raise their voice so that necessary steps can be taken to ensure the security of the workers at construction sites so that they do not loss their lives dyeing an unwanted death.

It deeply saddens the heart of the people seeing such unwanted death of innocent people working for their daily survival. Our concerns and condolences are with the departed souls and their family members get enough strength to overcome the loss and may we never get to see this kind of incident again.