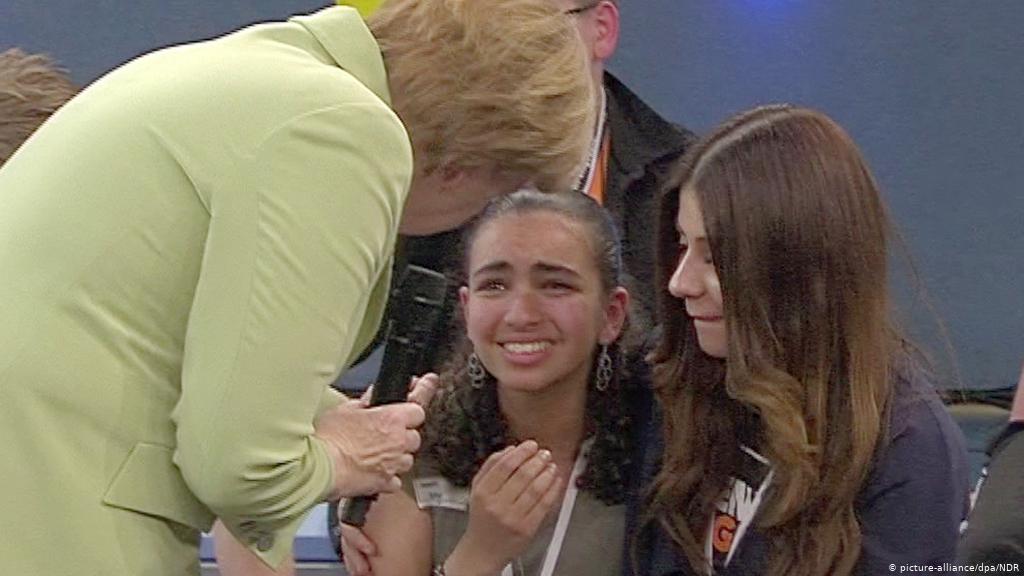 The tears of a Palestinian girl made the news in 2015, not so much because of the uncontrollable crying in front of the TV cameras or the suddenness of them, but because they were caused by a harsh statement by Chancellor Angela Merkel.

“You are a very nice girl. But you know that in Lebanon there are thousands and thousands of Palestinian refugees. And what if we told every. Reem, the 14-year-old teenager who had just told her with a smile and in perfect German that she just wanted to fulfill her dream of continuing to study and live like any of her classmates, collapsed at the words of the Chancellor.

Quickly, Merkel reached out to comfort and caress her, which is why the hashtag #MerkelStreichelt (Merkel caresses) was a trend in Germany. The episode confronted the Chancellor with the reality of asylum seekers as few times before, and criticism rained down on her inside and outside Europe.

But those who then pointed out their lack of empathy, neglect a much more crucial aspect, linked to the heart of German and European migration policy, which would begin to change that day.

Angela Merkel was not faced alone with the wishes and aspirations of a 14-year-old girl who for four years had been waiting for a response to her family’s request for asylum after having lived in various refugee camps in Lebanon and Syria.

Raised in East Germany, the woman was about to face the biggest refugee crisis since World War II, which required an extraordinary response on her part and whose consequences are still present today, when she is about to finish her fourth mandate.

“Wir schaffen das!” (We can make it!). Between harangues and expressions of desire, the sentence pronounced on August 31, 2015, went down in history, shortly after the Foreign Minister authorized the arrival of thousands of people to the country daily – one million refugees arrived only during the following year. And he added, almost appealing to a feeling of national pride: “To put it simply: Germany is a strong country.”

Now, that it is time for balance sheets, the nuances about the open-door policy and its 180-degree change of position appear, but the differences also existed then: while the Times magazine named her person of the year and the entire progressive political arc and of the liberal center-left greeted a policy that was read as a gesture of solidarity, some considered that the decision was excessive and that, for the worse, it ended up feeding the speeches of the national extreme right, mainly Alternative Für Deutschland (AfD).

Beyond ideological considerations, Merkel’s bet was supported by the majority of the German population, as indicated by a poll conducted in September 2015 by the Politbarometer according to which 66% of the population believed that allowing entry to a large number of refugees it was the right thing to do.

The crisis, triggered by a worsening of the war in Syria that began in 2011, also included hundreds of thousands of people from different Middle Eastern countries who undertook dangerous voyages by sea and land and who, in addition to violence, sought leave behind the harsh living conditions of their countries of origin.

Thus, those who arrived in Germany in that period – after 2015 they continued to arrive to a lesser extent, adding another 700,000 so far – did so mostly via the Balkan route from Syria, but also from Iraq and Afghanistan.

The humanitarian gesture of the Chancellor and the German response, in general, must be put in context: the European migration crisis also included those who tried to reach from North African countries through the Mediterranean in dangerous journeys at the hands of traffickers who too many times they were unsuccessful. International humanitarian organizations estimate that, since 2013, some 20,000 people may have lost their lives at sea trying to reach the shores of Europe.

It is that by then, the safest routes had been closed thanks to border policies of the continent that prioritized security over any humanitarian criteria, and Germany had been crucial in that definition, within the framework of the austerity plans imposed on the countries from the south of the continent.

According to Amnesty International data, between 2007 and 2013, the European Union spent € 2 billion on border security, while only € 700 million went to the reception of migrants. Several episodes, including the harassment suffered by two women by migrants at a Cologne train station at the end of 2015, fueled the fire of xenophobia and began to question the German reception policy during 2016.

And although Merkel always vindicated his decision, in a conference of his party, assured that a situation like the one at the end of the summer of 2015 “cannot and should not be repeated.” Since then the reception policy has been de facto toughened, with a drop in asylum seekers caused mainly by the obstacles that other countries imposed hindering the Balkan route.

To that was added an agreement signed between the EU and Turkey so that all persons arriving irregularly on the Aegean islands, including asylum seekers, are returned to Turkish territory. But the “wir schaffen das!” de Merkel, put in perspective, was not only going to refer to the opening of borders, but to what would be the most momentous challenge: the integration of refugees into the German market, culture and society.

To this end, in 2016 Germany passed the Integration Law, to guarantee asylum seekers access to academic and professional training, learning German, lessons to adapt to German society and job opportunities. “The message is that if you put in the effort, you can achieve something here,” then-Economy Minister Sigmar Gabriel said at the time.

The initiative quickly put Germany ahead of the rest of its European partners in this matter and, for many, it was a success: more than half of the refugees work and pay taxes in the country, while more than 80% of the children Refugees say they feel welcome and at ease.

However, a 2020 article in The Economist marks a caveat, which was pointed out in turn by refugee organizations and activists: less than half of refugee workers in Germany have a qualified job, despite the fact that more than 80% do. their countries of origin had it.

Indeed, in terms of employment, migrants remain well below the average for the German population, and the trend has worsened with the coronavirus pandemic due to the dismissal of many of them , employed temporarily and with low wages, mainly in the gastronomy, security, cleaning, construction and care sectors . This was established by a study by the Employment Research Institute (IAB), from 2020.

Regarding the language, however, the balance made by the specialized organizations is “quite good” , because the initial conditions of those who arrived in 2015 were particularly difficult, because German is a difficult language to learn for people from different countries. in which Arabic is spoken.

When it comes to crime, another indicator of integration, the data disproves a link between refugees and terrorist crimes. An investigation carried out by the Brookings Institute indicated, promptly, that there was no real connection between the refugee flows to Germany and the supposed increase in crime and terrorist attacks.

In fact, it revealed that refugees are more likely to be victims of violence than to perpetrate it. Official statistics also show a constant decrease in the rate of the number of crimes per 100,000 inhabitants since 2015.

In sum, the reception policy placed Angela Merkel at the forefront of humanitarian responses to the refugee crisis, although it earned her an attrition that was capitalized on by her country’s extreme right , reinforced after a series of isolated Islamist attacks, although isolated by the rest of the German political parties.

Now that the chancellor will leave power after 16 years, it remains to be seen what her potential successors will do with her legacy.