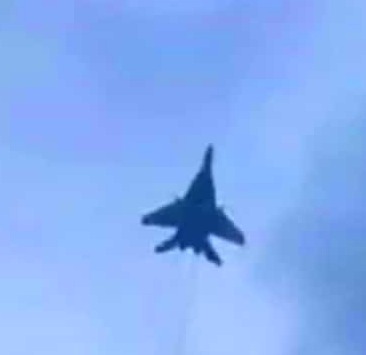 The Ghost of Kyiv is an unnamed jet pilot who is reportedly defending Ukraine against the Russian invasion. Despite its popularity and widespread discussion on social media, it appears that the Ghost is an urban legend – an aggregation of several accounts and individuals who spread the story as a morale booster. If the Ghost is a natural person, they would be the twenty-first century’s first “ace pilot.” As Russian soldiers gain control of Ukrainian cities two days after commencing “special military operations,” rumors of a strange MiG-29 fighter appearing above Kyiv to safeguard Ukrainian airspace from Russian aerial attacks are circulating on social media.

Netizens have shared videos of a Ukrainian fighter pilot known as the “Ghost of Kyiv” who is credited with shooting six Russian planes. The films of the “Ghost of Kyiv” on social media have gone viral. The Ukrainian pilot is being dubbed the “first European ace since World War II” by many on Twitter. In the world of aerial warfare, an ‘ace’ is a pilot who has shot down five or more planes in combat. Visegrad 24, a social media user, posted a video of a MiG-29 pursuing down ostensibly Russian planes. According to accounts, a Ukrainian pilot shot down six Russian aircraft on Friday, making him the first fighter ace of the twenty-first century.

Who is the Ghost of Kyiv:

The Ghost of Kyiv is a fictional fighter pilot who is said to have shot down six Russian jets on the first day of Ukraine’s invasion. This is most likely not factual; instead, the Ghost is most likely only an urban legend, with multiple different attacks attributed to one identity. (It’s worth mentioning that, if true, the Ghost would be the first pilot in the twenty-first century to kill more than five enemy combatants in a single day.)

The Ghost of Kyiv is said to have shot down six Russian jets, which would account for all but one of the seven Russian planes reported shot down on the first day of the invasion. The Mikoyan MiG-29 is a fighter plane with a short range. It was first designed in the 1970s and continued to be produced until 2013. Ukraine had roughly 80 MiG 29 jets in 2014; however, most of them were based in Crimea and were taken by Russia after the area was annexed. Ukraine’s air force has been drastically reduced.

Read More-Dr. Nina Rothschild, a scientist from NYC’s Department of Health, was   brutally attacked on Subway