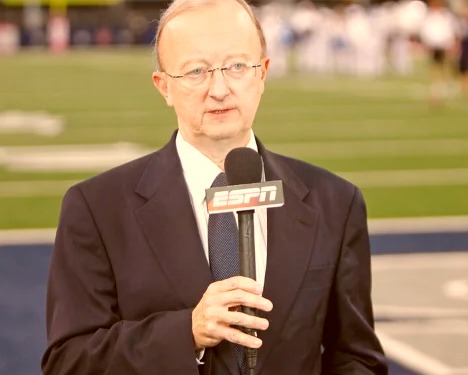 The NFL host and reporter John Clayton dies at 67

John Clayton, also known as The Professor, died on Friday after a brief illness in Washington. Clayton was 67 years old.

Who was John Clayton?

John Clayton was a National Football League reporter and radio host known as The Professor because of his widespread knowledge. He was a native of Pennsylvania and began his career in 1972 as a teenager. John has worked with ESPN as a radio host and reporter for over 20 years.

He was a long term member of the Board of Selectors for the Pro Football Hall of Fame. Also, in 2007, he received the Bill Nunn Memorial Honor – one of the highest known honors. Moreover, Clayton was a writer for ESPN as well.

Clayton’s death was announced on Twitter by one of his very close friends, Jeff Muzzy. She took to the platform to express her grief and said that Clayton had passed away at 3 p.m. Soon, it was discovered that he suffered a brief illness, but the actual cause has been yet unspecified.

After this news, many famous personalities and former colleagues took to social media to express their condolences. Everyone was heartbroken by this shocking news, and they were not expecting this tragedy to happen.

Many people said that he was a very nice person and that he was always ready to help everyone. Many people have also praised his speaking and writing abilities. ESPN also took to their official account to express their condolences.

Clayton has written and spoken for several channels such as the Washington Times, The Pittsburgh, The News Tribune etc. He breathed his last in a hospital in Bellvue in Washington. Clayton’s family has his wife, Pat and sister Amy. All of the sport’s World continues to remember this legend. He was given a two-minute silence honor in a recent match.

Read Also – Who was Zaid Kakish?