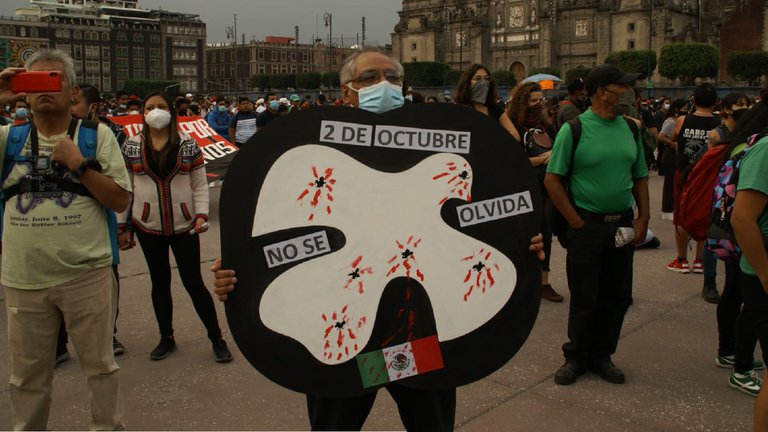 This Saturday the march for the 53rd anniversary of the massacre of students on October 2, 1968 was held in Mexico City . This is the minute by minute of the mobilizations from the Plaza de las Tres Culturas, in Tlatelolco , to the capital’s Zócalo:7:05 p.m.

After almost two hours of being encapsulated by security elements, and amid shouts and insults, the hooded men decided to withdraw from the Historic Center to the Garibaldi subway, unable to reach the Zócalo grid in order to carry out more pints and shreds.

However, they did so under the protection of both police and personnel from the Human Rights Commission of Mexico City and the Marabunta civil organization. A few minutes after the end of the rally in the Zócalo, where the roll call of all the victims of October 2, 1968 was carried out , the capital authorities reported at least 5,200 people participated in the mobilizations and 1,100 Police officers supported the protection of attendees and the iconic buildings of the route.

So far, five police officers have been injured by burns and bruises , although they did not require hospitalization.Likewise, about 80 hooded men remain within the siege of the elements of the capital’s SSC. They have not been allowed to pass because they did not agree to lay down their weapons. There is no detainee.

Félix Gamundi, a member of the 1968 Fighting Committee, said from the meeting in the Zócalo that justice must exist and not only apologize for the massacre of Tlatelolco, El Halconazo, Acteal or the disappearance of the 43 normalistas of Ayotzinapa.

Parents of the Ayotzinapa normalistas placed one with the legend “Dismember the Truth. Justice Now ”. The spokesman for the Presidency, Jesús Ramírez Cuevas , publishes a message on Twitter regarding the 53 years of the massacre of students in Tlatelolco.

The security elements form three fences and manage to encapsulate their attackers between Eje Central and Belisario Domínguez. Personnel from the Mexico City Human Rights Commission and the Marabunta civil organization are at the site to negotiate the release of the hooded men on the condition that they lay down their weapons.

The secretary of government of Mexico City, Martí Batres , reports in an interview for Milenio TV , that so far there have been no detainees and there have been three injured policemen : two women and one man, who did not require transfer to a hospital.

Meanwhile, Committee 68 , supported by civil organizations, youth, adults and some special groups such as normalistas from Ayotzinapa and students from the IPN and UNAM arrive at the Zócalo plateau . Another peaceful part of the march walks down Calle 5 de Mayo.

Upon reaching the height of Avenida Hidalgo , a few meters from the Palacio de Bellas Artes, there was a confrontation between dozens of hooded men and elements of the Secretariat for Citizen Security ( SSC ), after the former began to throwing Molotov cocktails and stones , putting the integrity of the activists and the media covering the march at risk.

The uniformed men use gas from fire extinguishers to repel the projectiles , while elements of the ERUM and Civil Protection protect the area. After holding rallies, pre-Hispanic dances and reading poems in honor of the victims of the massacre of October 2, 1968 , about 800 people left the Plaza Tres Culturas and its surroundings, in Tlatelolco , to go towards the capital’s Zócalo , in the Historic Center.

Activists, normalistas and young people walk on the Lázaro Cárdenas Central Axis with the historic slogan “October 2 is not forgotten”, more than five decades after the crimes perpetrated from the State.

However, while some advance in peace, groups of anarchists joined the rear of the mobilization to paint facades and launch fireworks, although no injuries have been registered so far.