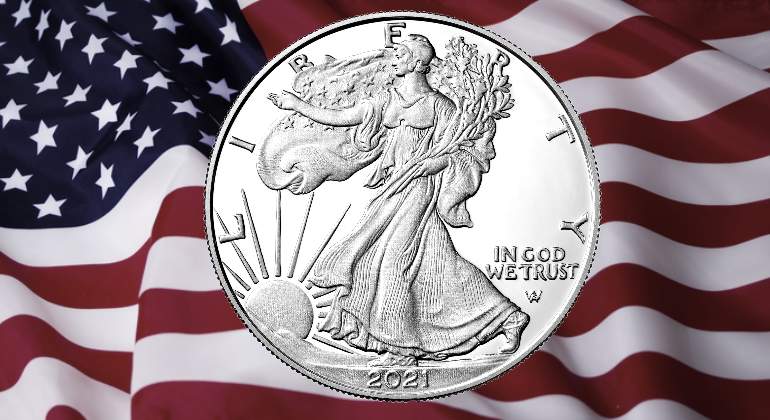 There is less than a month left for the United States to default on its debts. As with the federal budget, the country is once again constrained by a partisan struggle that occurs every so often and that keeps the nation’s economy in check. Catastrophe is just around the corner and legislators do not seem willing to back down. But the solution can be as simple as it is tricky: coin a ‘super coin’.

The US will face its debt ceiling in mid-October – it is estimated that on the 18th -, so it will not be able to continue borrowing and will nevertheless have to continue facing the immense debts it has incurred. Only Congress can raise or suspend that ceiling, preventing the country from defaulting on its creditors.

Since the two-year suspension that lawmakers approved in 2019 ended in July, the Treasury has been unable to issue new bonds, but has continued to pay back obligations. Since then, he has resorted to extraordinary measures to be able to meet these payments, but he is running out of options. Money is running out and, at the moment, there is no way to finance itself.

But some lawmakers have taken up an old proposal, a loophole, that could salvage the situation. The Treasury Department led by Janet Yellen could mint a trillion-dollar platinum coin and deposit it with the Federal Reserve, so it could continue to pay the bills.

The obvious advantage for the Biden administration is that this does not need congressional approval and would be left out of the partisan struggle. It only depends on the Executive.

In this way, the country could continue to face the payment of its debts , which not only include international investors, but also the payment of Social Security or the armed forces. For this reason, it is considered that if the default is reached, the economic recession will be practically assured.

“A delay that calls into question the ability of the federal government to meet all of its obligations would likely cause irreparable damage to the US economy and global financial markets,” Yellen wrote a few weeks ago to Democratic leader Nancy Pelosi, adding that the The economy can be hurt without defaulting, causing “serious damage to business confidence, raising the cost of short-term loans for taxpayers and negatively affecting the US credit rating.”

Thus, once the opposition lacked the ability to press the blockade on increasing the debt ceiling, negotiations could be facilitated, raise that ceiling and buy back the currency from the Federal Reserve to melt it again as if nothing had happened.

Yellen, who was president of the Fed and now heads the Treasury, has been in favor of wresting from Congress its ability to prevent further indebtedness in the country by abolishing the debt ceiling. In this sense, it alleges that it is the legislators who undertake to carry out certain expenses on behalf of the nation and must comply with those obligations.

“If it is necessary to issue additional debt in order to finance those spending and tax decisions, I think it is very disturbing to put the president and myself, the Secretary of the Treasury, in a situation where we might be unable to pay the bills resulting from those decisions. past, “he said in his appearance at the House Financial Services Committee this week.

A recurring idea
The idea for the platinum coin came in 2010 from the lawyer Carlos Mucha, who wrote down the proposal on a blog. It was with the limit of the debt ceiling of 2011 that the occurrence became popular, and it has been resumed on similar occasions.

Although there has been numerous criticisms of the measure, especially from Republicans, who have tried to modify the law to prevent that loophole, this notion was put on the table again at the beginning of the coronavirus crisis by Democratic congresswoman Rashida Tlaib, who suggested issuing two trillion coins to grant $ 2,000 to every American and jumpstart the economy without borrowing the government.

The coin would have to be platinum, since it is the only metal that the US currency law allows to have a value greater than $ 50.