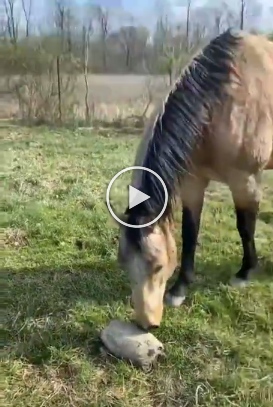 What did the dog and the horse smell?

A funny video of a dog ​​and horse has gone viral on social media and one won’t be able to stop laughing after seeing the video. The video was posted on Instagram where a dog can be seen barking when he sees something lying on the ground, and then a horse standing next to him appears and starts to smell the same, but after that something happens, after seeing this, one will be completely surprised. Judging by the fact that both the horse and the dog sniffed, that was not an object, but a tortoise. As soon as the horse approached the tortoise to sniff it, the tortoise moved a little, and after that the dog and the horse got so much frightened. As soon as the tortoise moves a little, the horse and dog tried to run away from there very strongly to save their lives, as if they felt that the tortoise will make them its prey.

A post shared by The Dark Side of Nature (@thedarksideofnature)

This viral video on social media was posted on the Instagram account “thedarksideofnature” and has been liked by more than 84k Instagram users so far. Users left funny comments after watching this video. One of them wrote, “That dog almost died.”