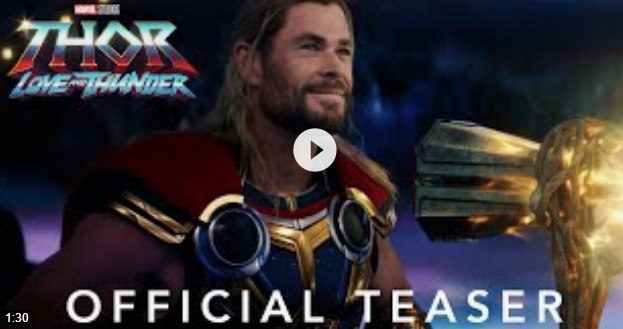 The teaser for Thor: Love and Thunder have here, and it’s everything we’ve been waiting for. The much-anticipated Marvel picture, directed by Taika Waititi, will hit theatres on July 8. Thor, played by Chris Hemsworth, announces that his “superhero-ing” days are finished in the teaser and sets off to explore himself in New Asgard. Natalie Portman appears as the Goddess of Thunder.

Thor: Love and Thunder’s first teaser has finally arrived, and oh, does it not disappoint. The Marvel Studios film’s sneak look lasts about two minutes and is accompanied by the Guns N’ Roses classic, Sweet Child O’ Mine. To begin with, Thor (played by Chris Hemsworth) believes that his “superhero-ing days are finished.” The God Of Thunder has chosen to forego the path of bloodshed in favour of peace. And it looks like self-discovery is his next destination. “These hands were once used for battle, now, they’re but humble tools for peace. I need to figure out exactly who I am,” he announces in the video. This also means it is time to put his hammer aside, but more on that later.

One of the impressive teasers among all Thor movie parts:

After Thor (2011), Thor: The Dark World (2013), and Thor: Ragnarok, Thor: Love and Thunder is the fourth Thor film (2017). Today, April 18, Marvel Studios released a trailer for the next flick. It’s already gotten a lot of attention. Thor tries to rediscover himself and find peace in the teaser, while Tessa Thompson leads Asgardians as Valkyrie. The trailer also features Chris Pratt from Guardians of the Galaxy. Jane Foster transforms into The Mighty Thor at the film’s climax, holding the mystical hammer Mjolnir.

Synopsis of Thor: Love And Thunder:

“Love and Thunder” is based on Jason Aaron’s critically acclaimed run on the comic book “The Mighty Thor,” in which Jane Foster, who dated and broke up with Thor, assumed the superhero’s mantle when the holy hammer Mjolnir considered him unworthy and robbed him of his powers. Foster’s newfound power, however, comes at a high price in the comics: every time she wields the hammer, her breast cancer worsens. However, it’s uncertain whether the film will follow the same plot.