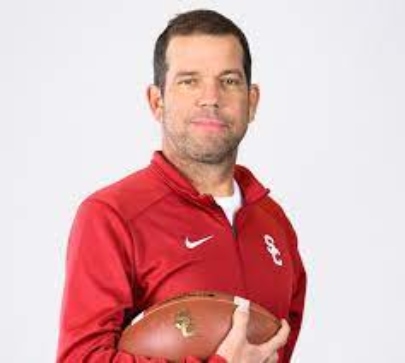 Southern California assistant football coach Dave Nichol died Friday in McKinney, Texas. He was 45. A person with knowledge of the situation told The Associated Press that Nichol had cancer. The person spoke on condition of anonymity because the cause of death wasn’t being publicly disclosed. USC head coach Lincoln Riley hired Nichol in December as his inside wide receivers coach and associate head coach for offense. Riley announced four days ago that Nichol was leaving the team to focus on an unspecified personal medical matter.

“We are heartbroken and devastated,” Riley said. “Dave was such a tremendous human being and a fantastic football coach. He absolutely loved the game and constantly poured his heart and soul into his teams. He will be dearly missed. My thoughts and prayers are with his family. We, as a program, look forward to playing and coaching for him as we move forward.”

His journey at USC:

Nichol was hired on Lincoln Riley’s new staff at USC as the associate head coach for offense and inside wide receivers coach. He led a long and accomplished career in coaching, including stints at Mississippi State, Washington State, East Carolina, and Arizona. “We are heartbroken and devastated,” Riley said in a statement. “Dave was such a tremendous human being and a fantastic football coach. He absolutely loved the game and constantly poured his heart and soul into his teams. He will be dearly missed.”

Nichol spent 2020 and 2021 at Mississippi State as inside receivers coach under Mike Leach, his first boss when he was a student coach for the Red Raiders. Prior to Mississippi State, Nichol was an assistant at Washington State from 2016 to 2019. He coached all receivers his first year before moving to inside for his final three seasons. Nichol was the outside receivers coach at East Carolina from 2012-14 before succeeding Riley as offensive coordinator and quarterbacks coach in 2015 when Riley left to fill the same role at Oklahoma.

His ever-positive attitude will be missed:

“Dave had such a positive personality, attitude and energy,” Leach said in a statement posted on Twitter. “He made everyone around him a better person and impacted everyone he met with kindness, loyalty and friendship. He meant a lot to me and countless others, and I will forever be grateful to have had him in my life for the last 22 years.”

Read Also:- The woman convicted in 2005 murder of her husband speaks from prison.