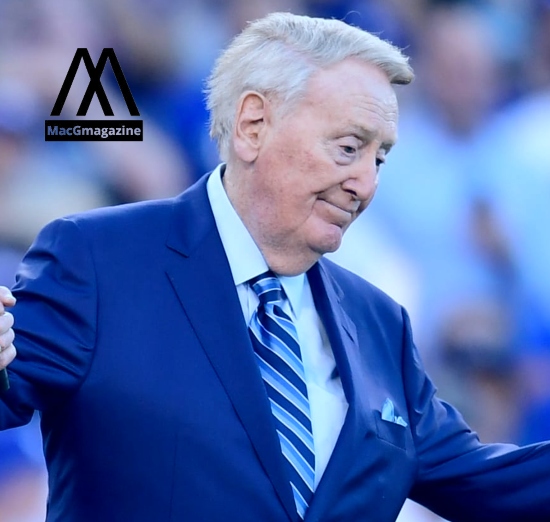 There have been many teams in many parts of the world but without proper storytellers what remains is blurred memories.  Vin Scully was god’s gift to dodgers his capability to narrate stories in a graceful manner became a prominent part of dodger’s image.

Vin Scully voiced dodgers for 67 years. it was his storytelling that he was available for almost all dodgers games. he was in Brooklyn and then in Los angles. he breathed his last at his home in LA. he was 94.

he also worked with NBC And CBA. his sporting knowledge and expression made him a national sports treasure.

he commented on most high profiles games in the history of games. he was part of the announcer;’s team inGame of the Week, All-Star Games, the playoffs, and more than two dozen World Series.

His work was so powerful that an American sportscaster association voted him the “no. 1 broadcaster among top 50 broadcasters of all time “

When dodgers changed to LA, the fans used to carry radios on their shoulders so  Mr. Scully could give moment-by-moment details to sports fans.

“I regard him, all things considered, as the master of radio and TV,”  “I regard him as the best baseball announcer ever.”

Vin Scully awards and accolades in the field of broadcasting:

in a poll in 1976. the fans came up with the unique idea of finding the most pleasant and memorable sports personality from dodgers in the last two decades, to no one’s surprise Mr. Vin Scully was awarded that.

“On the scoreboard in right field, it is 9:46 p.m. in the City of the Angels, Los Angeles, California. And a crowd of 29,139 just sitting in to see the only pitcher in baseball history to hurl four no-hit, no-run games. He has done it four straight years and now he capped it: On his fourth no-hitter, he made it a perfect game. And Sandy Koufax, whose name will always remind you of strikeouts, did it with a flourish. He struck out the last six consecutive batters. So when he wrote his name in capital letters in the record books, that K stands out even more than the O-U-F-A-X.” he died a visibly easy death.

Read More – Tiktoker Neil Almeida has passed away. How did the influencer die?