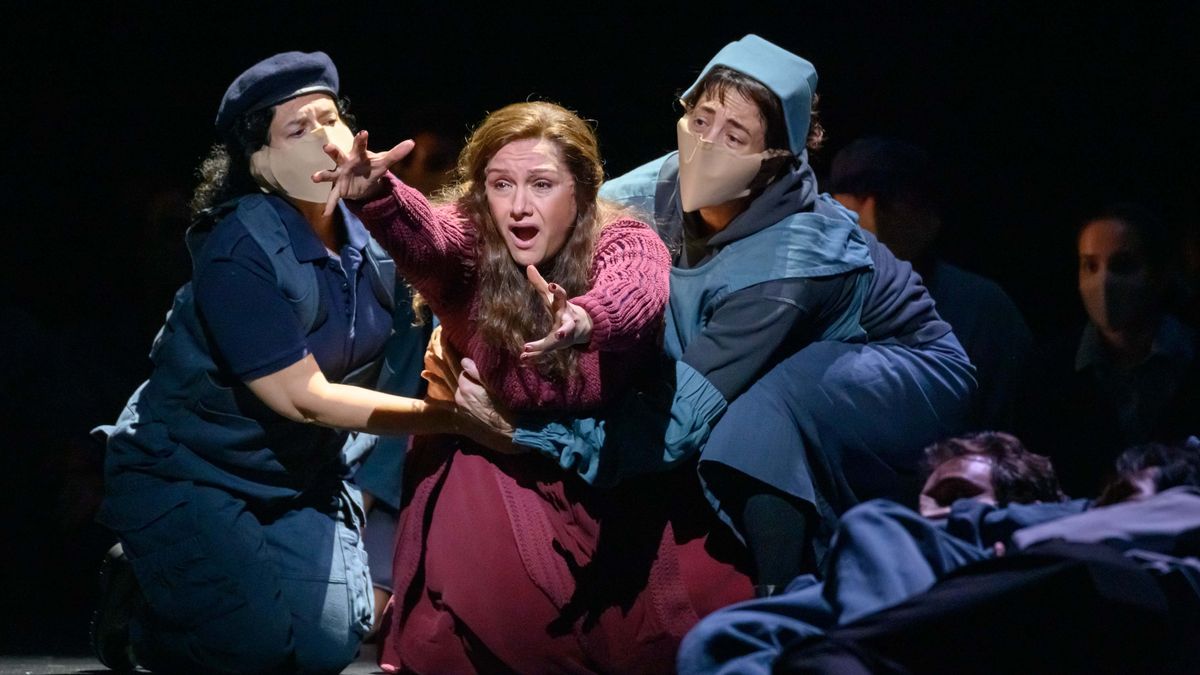 The anti-militarist ‘War Requiem’, an overwhelming symphonic-choral work by English composer Benjamin Britten, returns to the Liceu with his pacifist message enhanced by an impressive staging by Daniel Kramer with images created by the sought-after video artist and photographer Wolfgang Tillmans, winner of the Turner Prize.

Directed by Josep Pons, the Liceu Orchestra and Choir, together with the Cor Infantil de Veus-Amics de la Unió de Granollers, perform the piece with a magnificent trio of soloists who, as the composer of the work wanted, represent to three countries in conflict during the Second World War: the baritone Matthias Goerne, German; the tenor Mark Padmore, English, and the soprano Tatiana Pavlovskaya, Russian. “It is one of my favorite works, which I have performed all over the world”, highlights the singer, who, like the rest of her colleagues, great performers, considers this oratorio essential.

It is the first of several 20th century works offered by the Liceu this season . Britten combines in ‘War Requiem’ passages from the Latin Mass for the Dead with poems by Wilfred Owen written during the First World War.

The soprano, the choir and a large orchestra, the children’s choir and the organ focus on the more canonical part while the baritone and tenor are in charge of the poetic texts together with a chamber orchestra. All the troops unite in the overwhelming ending of one of the most powerful works of the 20th century, a cry against the war premiered in 1962, in the middle of the Cold War.

Artists against Brexit
“Although the play speaks of the disaster caused by World War II,We have created this piece looking further, wondering about the meaning it has for us today, “says Kramer. For the North American stage director, who was artistic director of the English National Opera between 2016 and 2019, with Brexit the piece acquires a different reading.

“I hired a team of people from different countries in response to the rampant nationalism that I saw around me when we were preparing the work,” he recalls. “In his music there are some disagreements in some solos but what predominates is harmony” A harmony that is now difficult to find in a UK increasingly isolated from Europe. And Padmore adds: “As artists we feel ashamed because the solidarity of our country has been broken. England is no longer in favor of cooperation,Brexit is a disaster . ”

Benjamin Britten, the most prominent English composer of the 20th century, avowed pacifist and conscientious objector , composed this commissioned work to commemorate the recovery of Coventry Cathedral in 1962 after its destruction during World War II. In reality, like many of his works, this one contains a subversive message. Beyond the spirituality of any requiem, this work involves a moral reflection. In it there is a criticism of the hypocrisy of power, both that of the Church and that of governments.

Awaken consciences
For Padmore, there is always something subversive about staging an oratorio, as was Britten himself. “Explore the piece in a different way, from many more angles. It makes you think, goes beyond the beauty of music and penetrates all the pores of your skin. It is a powerful way to awaken consciences, to make people understand what we say when we sing. This text has something that challenges us “, says the tenor, who has already performed other oratorios such as ‘The Passion According to Saint John’ with a staging by Peter Sellars.

The images of Tillmans, some more abstract, others more symbolic, amplify those that appear in the text of ‘War Requiem’ and enhance the different atmospheres that are created with the music. A dead soldier and his executioner making peace in purgatory, a man who criticizes his own religion. The tragic, the grotesque and the symbolic are mixed in the piece, which uses many images, some filmed in Coventry Cathedral.