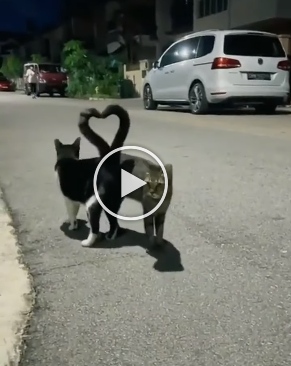 Watch: Cats expressing their love by making hearts with their tails will melt your heart

Where was the viral video uploaded and how many views did the video receive?

We see a lot of cute animal videos on the internet, and they appeal to us a lot. On social media, a video of two cats expressing their love for each other in different ways is going viral. He is such a wonderful power that no creature, human or animal, can thrive without him. This lovely sensation is required in everyone’s life. This video of cats was uploaded on the Buitengebieden Twitter account, where we frequently see fresh amusing films. This video has already received over 2 lakh views, and internet users are reacting to it in a variety of ways.

About the video of the cats:

Two cats, one black and the other brown are seen coming face to face on the road in this adorable video of cats. This scene is similar to a woman visiting her lover. Both cats first look around before moving towards each other and expressing their love by moving their tails. A cat flushes and lies down as a result of this. It is unknown where this video originated, but it has left every internet user smiling.