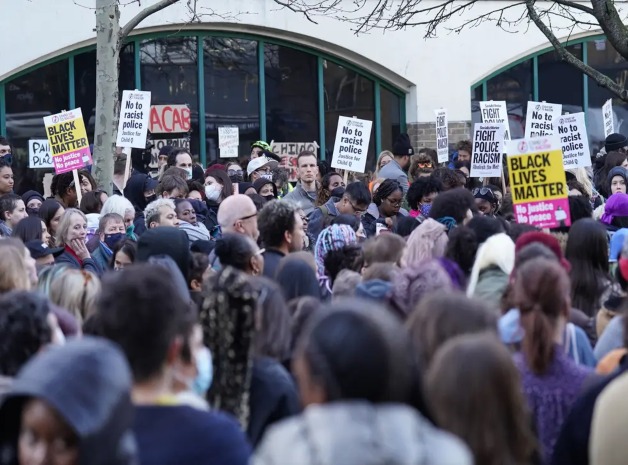 According to the legal firm Bhatt Murphy, a 15-year-old student, now labeled as Child Q, is pursuing a legal lawsuit against the Metropolitan Police Department and her own school. The Black student in the United Kingdom was forced to strip and was searched in the middle of school while she was menstruating, exposing her nether regions.

In her school in Hackney, east London, the child was experiencing menstruation and was forced to discard her sanitary pad for the strip search. Four cops, including two women, were dispatched to the Hackney school to conduct the wrongful search for the youngster due to her “smelling like marijuana” which was later found out to be untrue. Even during the incident, no other grownups were there, and the victim’s mother was not contacted.

The mom of Child Q said that their child was then instructed to “put on the same dirty towel again” since they wouldn’t let her go to the toilet to wash herself clean.  Three officers from the Metropolitan Police Department are now being investigated for their roles in the heinous strip search of a black teenager. New development in the case revealed today that 25 personal searches were performed out on youngsters in Hackney over the course of a single year, raising concerns that all this is part of a prevalent practice in England’s varied and ethnic institutions.

23 of the 25 strip searches were conducted on black children, and in virtually every instance, absolutely nothing substantial was discovered, leading some to suspect that the searches were conducted with racist motivation. According to a safety assessment released in March, the strip search by Metropolitan Law enforcement personnel took place in 2020 without any family supervision of the victim and in the understanding that she was on her menstruation.

Child Q’s family released a statement through their lawyers on Wednesday, “This was not treated as a safeguarding issue but a criminal matter. Professionals treated her as an adult. She was searched as an adult. Is it because of her skin? Her hair? Why her? Do you think it is appropriate for a Black girl to be searched without a parent or family member? Would [you] allow your child to be strip-searched and questioned without consent or a guardian present, for a 15-year-old to be interrogated by multiple unnamed police officers?”

Police are under attack by the public. Thousands have gathered outside the Metropolitan Police Dept. and have started protesting to get the girl justice and to punish the officers severely who made a child go through this harrowing incident.