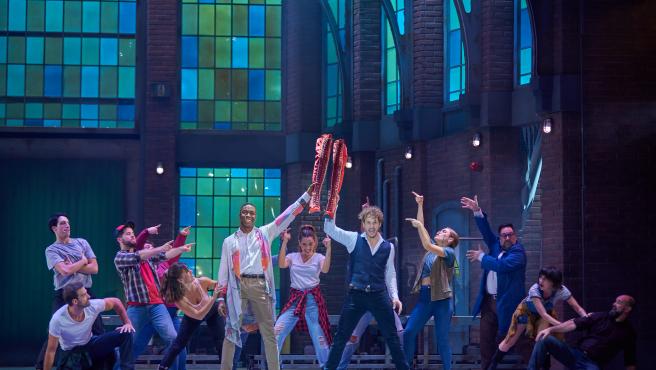 Broadway sneaks into Madrid with Kinky Boots , a renowned musical that has visited the main cities of the world before arriving in the capital at a “very necessary moment” , according to its main actors in the press pass held hours before the premiere.

Daniel Diges , Tiago Barbosa and Angy Fernández hope that this story of overcoming two people who have nothing in common “change lives” in a version that “has nothing to envy the original” : “People are going to feel many emotions and he will come out as another person “, Diges has assured very enthusiastically. .

Based on a 2013 film, with text by the great Harvey Fierstein and music by Cyndi Lauper , it follows the life of Charly, a young businessman who inherits his father’s shoe factory at a time of crisis. Threatened by bankruptcy, he finds the key to salvation in Lola, a London drag queen who helps him discover the world far beyond his business.

The one who was representative of Eurovision in 2010, is already an experienced in the world of Madrid theater. Daniel Diges has been as excited as the first day in the meeting with the press and has commented that his character, Charly, “is one of the most important acting trips” of his career.

He has found in the musical a way of communicating to the world the most essential values ​​of his life, respect . “I have an autistic son and I see that there are people who do not seem to accept that someone is different,” he confessed, pointing to the need to change the mentality that “being different is worse.”

” This musical comes at a time to open minds and to explain to people that you have to respect and love, especially love, because as Lola says to Charly in the play: ‘In the end, we are almost the same’ “, he added.

Tiago Barbosa, from León to ‘drag queen’
Lola, played by Tiago Barbosa , the Brazilian actor known for his role in The Lion King , bears the full emotional weight of Kinky Boots , as she plunges into a shoe factory where not everyone understands her decision to be a drag queen.

For Barbosa this role has been an acting challenge like no other before. After five years in the skin of Simba , he has changed his plumage for heels and has faced a long script in a language that is not his own.

“Now I appreciate women much more , ” he begins by jokingly explaining as he tries to sit on a chair with the wardrobe, a red sequined miniskirt dress and high-heeled boots. “I had never done drag and I have needed stiletto and fashion classes to know how to move in this more feminine world and enter Lola’s universe,” he detailed.

His first challenge was “not to sound like a joke” and to trust himself in order to face the extensive dialogue in Spanish with more confidence. At all times he has had the help of Daniel Diges, whom he now considers a great friend.

“Working with Dani is a great gift, I couldn’t have a Charly other than him. He takes care of me a lot because he knows the difficulty of being in another country .” Diges and Barbosa crossed paths a couple of years ago for a few days, when the Spaniard arrived in Brazil to be part of Les Miserables and the Brazilian returned to Madrid to continue his career.

Now that they have finally met, they are eager for the public to enjoy this show of dance, music and humor that comes “at a very important moment for society.”

The importance of ‘Kinky Boots’ beyond the theater
The attacks on the LGTB collective are very present in the minds of the entire cast when it comes to getting on stage and showing this story against intolerance. Angy Fernández , who plays one of the factory workers who helps Charly get the business back, assures that this new wave of violence “unnerves him.”

The young Mallorcan woman has grown up surrounded by friends belonging to the group and has always been part of jobs where acceptance is a key issue in development. Therefore, he does not give credit with this new situation. ” I have drag queen friends who say that now they are afraid to go out on the street and I do not understand why it is. I do not know if it is because of Vox, but be quiet for 100 years, please, ” he commented very vindictively.

For her it is very important that between the constant joy that is Kinky Boots there is a moment of “reality”, because “life is not always joy and it is necessary to see this turning point” : “There are still homophobic people who insult and he doesn’t accept people as they are and this moment helps change the public’s perspective. ”

For the director, Ricky Pashkus , who also adapted the musical in Argentina, “you have to be a very bad person to dance and vibrate with the work, and then in the street have attitudes that you know we can’t take anymore.”

Of course, the entire cast knows that this premiere is part of a boom moment in the drag queen universe . The concept, considered a niche a few years ago, is increasingly recognized by society. For the general public, Kinky Boots will be an entertaining way to understand something that could be unknown just a few months ago.