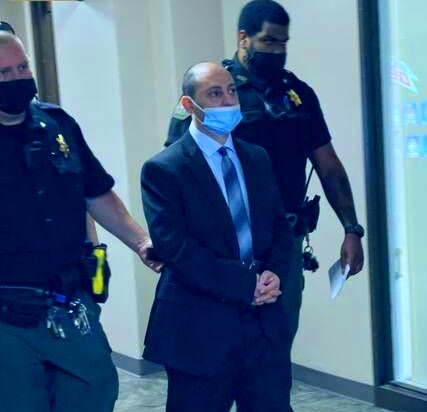 Dana Ganjeh murdered Lana and said he was falsely blamed

Dana Ganjeh who was convicted of murdering did not even offer condolences to the family of the woman, he berated them.

On Wednesday, the sister of Linda Frick prepared an impact statement from the victim’s side which was supposed to be read at his sentencing, Ganjeh remarked that the family was never there for her until today.

Meanwhile, before Luzerne County Judge David Lupas imposed a mandatory sentence of life in prison without parole, he reprimanded Ganjeh, standing handcuffed and shackled in front of Lupas, for what was perceived as a threat. Lupas also denied a last-minute motion filed by him for a new trial.

Dana Ganjeh, 43-years-old, stayed unapologetic and said that he was falsely convicted of first-degree murder in the death of a Frick, who had been in an abusive relationship with him. He protested and believed he was railroaded in the courtroom.

What happened to Lana?

On Sept. 17, 2021, Dana Ganjeh was found guilty by a jury after a three-day trial. Prosecutors alleged Ganjeh of beating Lana Frick, 56-year-old, at a home in Wayne County where she would live with her brother. On Aug. 4, 2018, her body was found under a blanket in a Toyota Rav4 which was parked behind Ganjeh’s residence on Price Street in Kingston. Frick had 17 broken ribs and severe bruises on her head, chest, and right ankle that had been slammed into a vehicle door, revealed by an autopsy. In Wayne County, Ganjeh had charges pending on him of assault, burglary, strangulation, and many more.

Ganjeh said that the case of Luzerne County was one of self-defense and the witness lied there. He believed in justice a lot, but it was justice at all for him.

Lana Frick’s sister, Sharon Frick described that Lana was the oldest of six children, a single mother of two children, a grandmother, and a lovable aunt to seven nephews and nieces. She said that her sister drank, but that does not mean that Ganjeh would brutally murder her. She further told that Lana was trying to distance herself from Ganjeh, who would not stay away.

She released a statement that reads, “Consuming alcohol does not make one’s life less valuable. The fact is Linda was at home. Linda was minding her own business and Linda was staying far away from Dana, he just couldn’t let her be. If I’m being blunt, Dana is just an extremely dangerous man. Imagine the amount of hate and rage inside that it has to take to be that violent, that savage, that brutal.”

In addition to imprisonment, Ganjeh was also ordered by Lupas to make restitution of $14,961 for services provided by the Pennsylvania State Police, the District Attorney’s Office, and the county Coroner’s Office to lodge a trial witness. Ganjeh was informed by him of his right to file an appeal and gave him credit for the time served in the Luzerne County Correctional Facility since his arrest nearly four years ago.