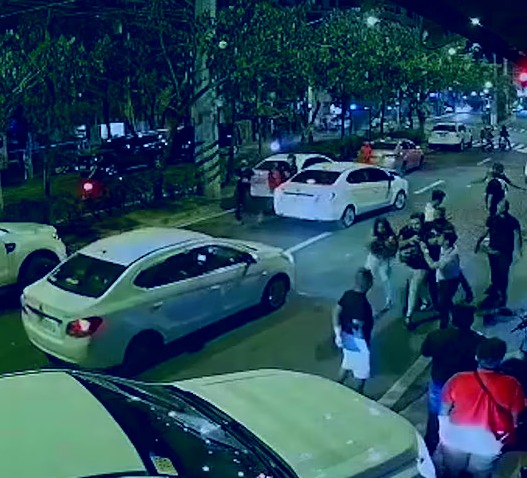 Former famous boxer Darren Wall who is facing a life sentence in Manila Jail, was seen attacking a group of Club Revellers. It can also be seen that his wife, Filipina, is dragging him away from the group.

Darren Wall, who is now near spending five years in the Manila prison, was arrested at a nightclub in Manila’s red-light district. He was carrying a 9 mm Beretta pistol and 6 g of cocaine. The four _-year-old boxer was accused of running an underworld reign of terror. He was charged with involvement in the kidnapping, drugs, trafficking, gun-running etc.

In viral CCTV footage, it can be seen that the boxer confronted a group of men outside the club but was held away by his bodyguards. Wall then gets furious, and his wife can be seen dragging him away. His wife is named Khanary Jane Abejo, and she is 23 years old, which is almost half of his age.

But, not being able to control it, Wall started punching a man with a white T-shirt and injured him with hai strong punches. His wife then tried her best to take him away. It was then that he was relieved, and then they drove off. Wall has allegedly been accused of beating and bullying people around. When questioned about him, the bar people said that she often comes here and goes around bullying people.

Meanwhile, Wall was found to be involved in several illegal activities recently along with his wife, whose major crime was obstructing the police. Wall and Abejo both have one child together. When asked, his wife said that her husband was good to her and had never hurt her. Wall came to be known as Jack after he got the Union Jack tattooed on his neck.