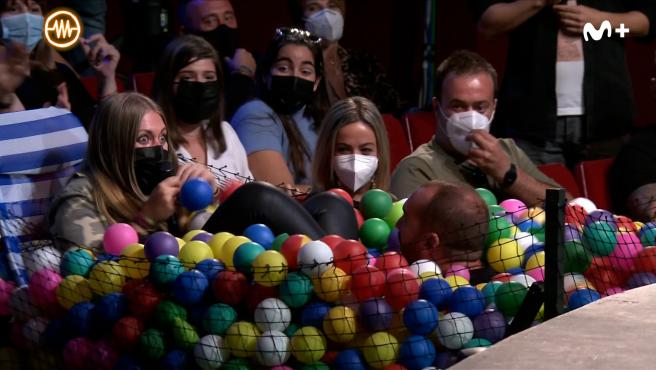 The delivery for the program and the show is admirable when it comes to the collaborator Jorge Ponce, who spent almost an hour and a quarter hidden, lying down and without moving in the ball pit of La Resistencia , just to give a scare.

In the Movistar + program presented by David Broncano, since this season there is a VIP seat for the public that consists of a beach lounger tucked into a small ball pool, from which to see the stage in a privileged way.

In the last broadcast of the program David Broncano encouraged a girl in the audience to take a seat on the deck chair , which the girl did between jokes. And suddenly Jorge Ponce appeared screaming at her feet, to the fright of the girl and of all those who were nearby.

“I’ve been in there for an hour. Two anxiety attacks have given me in this time, ” Jorge Ponce said when he finally managed to speak and after having achieved his mission.

“This was done a lot by Michael Jackson at the Burger King in Los Angeles,” said the collaborator jokingly, dressed in a T-shirt and shorts to which plastic balls had been attached for better camouflage.