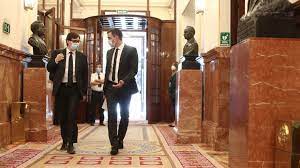 The Spanish Government will transfer this Friday to the communities the last 4,046 million euros of the extraordinary fund of 13,486 million established to cushion the effects of the Covid-19 crisis on finances, of which 193.3 million will go to the Basque Country.

As reported by the Ministry of Finance and Public Function, the amount transferred this Friday is added to the 9,440 million euros – 70% of the total – that were already distributed last September.

The transfer of those 13,486 million euros from this fund is outside the financing system, it had already been communicated to the autonomous governments in the autumn of 2020 and was contemplated in the General State Budgets of 2021.

Euskadi received 451.1 million euros in September , which added to the transfer this Friday makes a total of 644.5 million subscribers, as detailed by the Government delegation in Euskadi.

The Treasury recalled that the adjusted population criterion used for the distribution of this fund “is the formula chosen by most governments” after the Ministry, “following the principle of co-governance and the greatest consensus”, opened a process of dialogue with the communities to find out which distribution criteria they preferred to apply.

The allocation to Euskadi and Navarra responds to the 2020 adjusted population that would result from applying to all the communities, including the provincial ones, the variables and weightings provided for in Law 22/2009; and Ceuta and Melilla received a total of 10 million euros, three of them today, each, after having received seven million in the first installment.