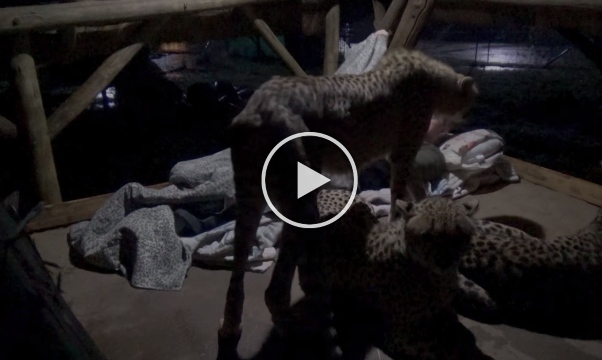 About the viral video of a man sleeping with three Cheetahs:

The internet is going crazy over a video of a man sleeping with the Cheetah Family at night. This movie was published on YouTube with the description that it was done as a CHEETAH EXPERIMENT in South Africa, at ‘The Cheetah Experience,’ a cheetah-breeding center, and Volker (the man) received special permission to spend overnight with three cheetahs for this experiment so that he could learn more about them. Volker is an animal advocate with a Zoology degree who is interested by and studies animal behavior, according to his YouTube account.

Volker’s (the YouTuber) thoughts on the video:

He remarked on his YouTube account after posting the video: “Warm blankets and company or chilly concrete for cheetahs? These cheetahs were raised and birthed in South African cheetah breeding institutions, one of which was the Cheetah Experience. They’ve all been groomed for the breeding program, so when they have pups, they can be constantly monitored. That is made possible by a mother who is accepting and approachable. In the near future, one of these cheats will be released into a protected wild. Because I had observed them grow up and formed a relationship with them during previous volunteer work, I was given special permission to spend my nights with them.”

The video has received 17,608,753 views so far, and netizens are reacting to it in a variety of ways. “I love how one cheetah is sleeping while the others are awake -just like us, yet animals never get pissed when they wake up from sleep due to disturbance, whether it’s cheetah or tigers,” a fan remarked after seeing the viral video of his favorite Youtuber.