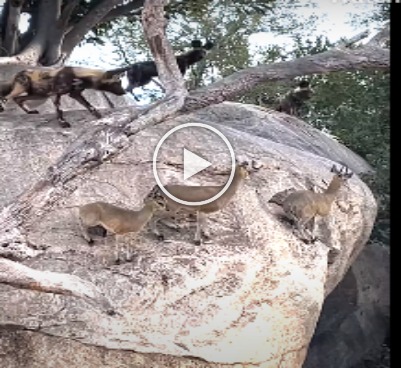 On a social media platform, one gets to see a lot of videos that freshen up our mood and puts a smile on our face, and some videos that are so amazing that while watching we think we don’t know what’s going to happen next in that video. Today, one such shocking video in which three deer stood on the edge of a cliff to save their lives from wild dogs, and after that something happened next one may be surprised.

How did the wild dogs try to chase the deer?

In this video, three deer can be seen standing on the edge of a cliff to save their lives, with wild dogs trying their best to make them their prey. Some wild dogs stand at the foot of the cliff so that if any deer litters below they can catch it, and some deer stands on the cliff trying to come to the edge so that the deer can make their prey, but the deer patiently stands in one place without any reaction. At the end of the video, you can see that a wild dog is approaching the deer, but due to the high altitude, they leave from there. This video was posted on the YouTube channel ‘Latest Sightings’, which has 6.7 million views so far.

Read Also – Women hold the tail of a lioness viral Video
In this article: