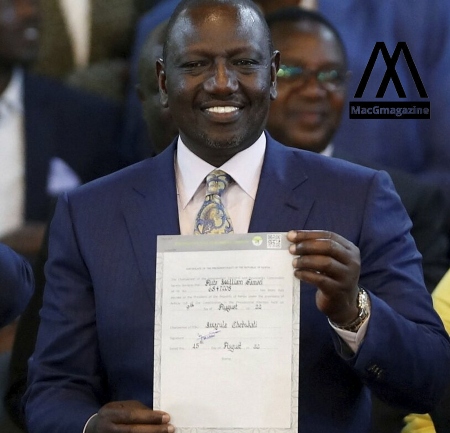 William Ruto is the new president of Kenya:

The Battle was so tight. the former prime minister Raila Odinga who was fighting his fifth election was so close to winning. William Ruto attained 50.49% of the total vote. Kenya will see its fifth president very soon. He won the presidential ship in his first attempt. His part of Kenya’s first coalition won the majority seats in Kenya’s parliament.

The result announcement had major drama. 4 members of the election commission did not agree with the commission’s chairman Wafula Chebukati’s results. The result was delayed from the standard time.

The dissenting officials called for a press conference away from the election commission office and they disrupted the results. The vice chairman of IEBC was also one of the dissenting officers but there was no evidence from them.

The election results were already denied by the opposition much before it was even announced. Ruto’s opposition Odinga was aware that he will lose so he tried to pander to his voters that the results are rigged. this can very well cause a civil war but politicians do not care about human life. All they care about is power.

The national tallying center saw broken chairs, and fighting after Odinga said he will not accept results.

Ruto made his first appearance after winning the election:

‘It’s not over till it’s over

Ruto showed gratitude to the people of Kenya after winning the presidential election.

“It was God that brought us here … my team and I will make sure that the sacrifices made by many Kenyans is not in vain …I will run a transparent, open, democratic government and I will work with the opposition to the extent that they provide oversight over my administration,” he added.

Ruto was tried in an international court for crimes against Humanity:

Ruto is also accused of killing people in 2007 election violence, He was tried for Crimes against humanity, and later as expected the case was shut down.