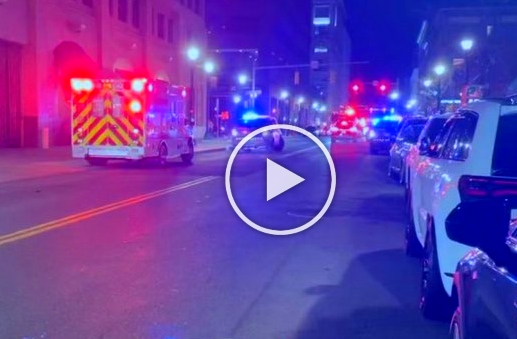 Brandon Rolfe was arrested for the shoot-out at Armory Square, injuring 4 and killing one

A 23-year-old man was arrested Tuesday for a shooting that left one dead and four injured early Saturday morning at Armory Square, the Onondaga County District Attorney’s office said. Brandon Rolfe of Syracuse is accused of shooting five people just after midnight on the 300 block of South Clinton Street, First Assistant District Attorney Joseph T. Coolican said Tuesday. Akok Lual, 24, of Syracuse, was the only one killed in the shooting, Syracuse Police Chief Ken Buckner. Akok’s younger brother, Lual, was also shot to death on Saturday morning in Armory Square.

He was initially in critical condition at Northern State University Hospital, but as of Tuesday, his parents, Mary and Peter Lual said he was much better. Three other victims received injuries incompatible with life, and the police did not identify them. According to Buckner, the fatal shooting took place between Al’s Wine and Whiskey Lounge and DP Dough after an altercation between several people. The police did not say if any of those shot was involved in the quarrel.

The officers were only 30 to 40 feet away when the shooter opened fire, Buckner said. At least five shots were fired and panic ensued, said the witness. Rolfe was identified as a suspect in the shooting after an investigation by detectives, numerous witness interviews, and the collection of physical evidence from the scene, Syracuse police spokesman Lt. Matthew Malinowski said in a news release Tuesday.

On Tuesday morning, Rolfe turned himself into detectives at the Public Safety Building without incident, Malinowski said.

Coolican said, “Rolfe is being charged with second-degree murder, second-degree criminal possession of a weapon, and four counts of second-degree attempted murder.” He is being held at the Onondaga County Justice Centre until his scheduled arraignment on Wednesday morning.